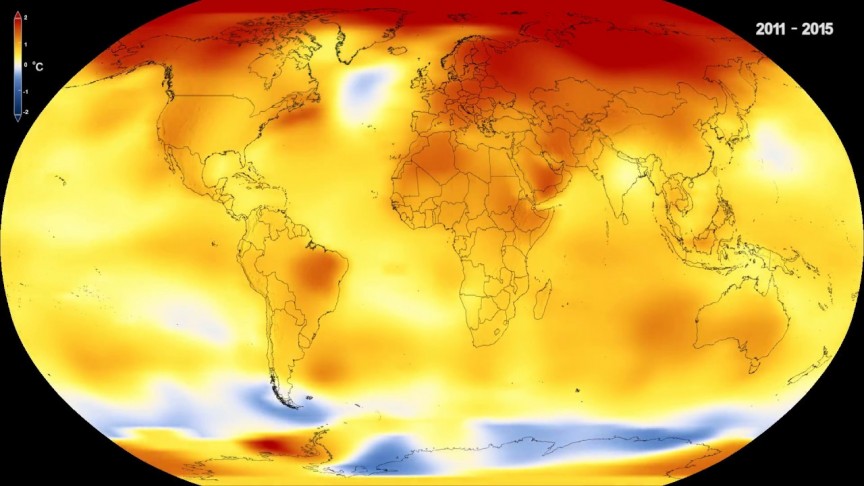 When you’re one tiny person living amongst 7.6 billion people on a small planet in just one Solar System in just one of billions of galaxies in the Universe – sure, it may be difficult to grasp the level of climate change affecting Earth right now.

But the undeniable fact is that our planet is undergoing global warming on a scale that we modern humans have not experienced – and you can see it with your own eyes in a recent timelapse video released by NASA.

In just 36 seconds, this video encompasses the history of Earth’s global surface temperatures since records began in 1880 – all the way to 2017, with its second-warmest temperatures on record, according to NASA.

NASA gathers its planet surface temperature data from a vast network of 6,300 weather stations, ships, buoys, and Antarctic research stations. It’s one of three major temperature representations of this sort, and they all show pretty much the same trend.

And this moving visual really drives the point home.

With simple colour coding, the video represents trends in global temperature averages as they change against the mid-20th century mean – a measurement known as a temperature anomaly.

Back in the 19th century, and for the better half of the 20th century, the temperatures fluctuated neatly across the map – blue in some areas, orange and red in others where things got hotter.

But there’s a gut-wrenching shift somewhere in the 1980s, as the globe slowly gets overwhelmed with yellows, oranges, and more and more reds, until it stops on the fireball of the past five years.

Last year did slightly buck the trend of relentlessly climbing temperatures, but only just – and it still gained a new distinction of becoming the hottest non-El Niño year we’ve experienced.

“The past three years have all been in the top three years in terms of temperature records. This is part of a long-term warming trend,” Petteri Taalas, Secretary-General of the World Meteorological Organisation, said back in November last year.

So, yes, global warming is happening. (And by the way, the term ‘global warming’ has not been superseded by ‘climate change’: they refer to two different, linked phenomena.)

This latest video is an updated version of a visual NASA released last year, and it bears being shown over and over and over until the message sinks in.

Despite overwhelming evidence that Earth is experiencing climate change, there are still some people who choose to ignore this, and there’s only so much that can be done to persuade them otherwise.

But for most of us, graphs like this one are motivation for taking action and doing what we can – by cutting greenhouse gas emissions, banking on clean energy technologies, and just taking better care of this little space rock we all call home.