Yesterday was extra special for a recently rescued six-month-old pig named Easter, as well as for the more than 150 others that now call her family!

It was also a day that could have turned out to be Easter’s last had it not been for the compassionate and determined people at The Pig Preserve in Jamestown, Tennessee.

WAN talked exclusively with Afton Hughes, The Pig Preserve’s farm manager, about the sweet pig that had been purchased one week before her rescue by someone who had planned to make her Easter dinner. Thankfully, he changed his mind probabily because he didn’t have time to do it himself, so he decided instead to relist her to “flip her for her meat.” 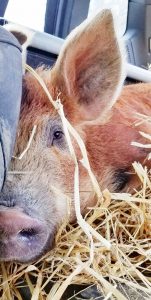 “One of our followers reached out to us after noticing a post that a ‘barbecue pig’ was available for sale on Craigslist,” Hughes told WAN further explaining that the kind-hearted animal lover raised the $80.00 to purchase her. “The next morning, we made the two-hour drive to pick her up.”

According to Hughes, the pig, who weighs in at less than 150 pounds, made the trip home easy despite the fact that she was covered with hog lice for which she has since been treated.

Now, as per Hughes, Easter, is happily eating and playing with the other rescued pigs on the farm, wild pigs, and potbelly pigs who call the 150-acre open space sanctuary home.

“It’s Easter’s first Easter dinner! This is the only way to have a pig over for dinner,” noted a post on the sanctuary’s Facebook page yesterday. “Now she’ll always have enough food, company, love and freedom!” 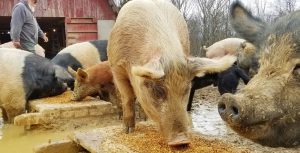 While The Pig Preserve occasionally allows visitors, it is primarily closed to the public to ensure the health, welfare, and freedom of the pigs to wander, explore, and peacefully “live life on their terms.”

This is especially refreshing following the many cases in which animals are unfairly and inhumanely exploited for so-called entertainment purposes and human greed.

It is quite the financial burden to bare though on the 30-year-strong non-profit that heavily relies on donations to properly feed and care for the pigs, as well as to make room for more in need of rescue.

Currently, the sanctuary houses 18 barns but needs to add more to accommodate new arrivals. Each barn costs $4,500.00 and a GoFundMe page has been created to help fund them. 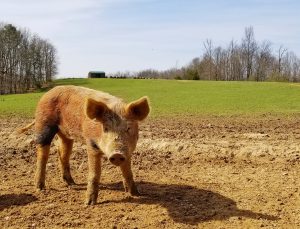 “We are a mom and pop sanctuary and run off of donations and our own funds,” notes The Pig Preserve’s website. “Every single donation, no matter how small, makes a big difference.”