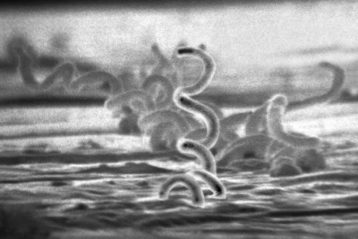 The infection can affect both men and women, and it typically starts as a painless sore, known as a chancre. Syphilis spreads from person to person through direct contact with a syphilis sore, according to the CDC.

One of the misconceptions people may have about syphilis is that the disease has been eliminated, said Dr. Lindley Barbee, an infectious-disease specialist at Harborview Medical Center in Seattle.

In fact, syphilis was nearly eliminated about a decade ago, but today the disease is on the rise, according to the CDC: Nearly 28,000 cases of primary or secondary syphilis, the most contagious stages of the disease, were reported to the CDC in 2016. Syphilis rates increased by about 18 percent from 2015 to 2016; the majority of cases occurred in men who have sex with men. [Related: America’s STD Epidemic: Chlamydia, Gonorrhea & Syphilis Cases on the Rise]

In 2016, there were about 630 cases of congenital syphilis — the form of the disease in which a pregnant woman transfers the infection to her baby. This represents a 27 percent increase in cases of congenital syphilis from 2015 to 2016, with huge increases seen in California and Louisiana, said Barbee, who is also the medical director, Public Health – Seattle & King County HIV/STD Program.

Congenital syphilis can cause serious health complications, including stillbirth and premature birth, as well as brain and nerve problems in infants, which can result in developmental delays, Barbee told Live Science.

But the troubling rise in syphilis among women and newborns is preventable through routine screening of women during pregnancy and immediate treatment for those women who test positive.

The use of condoms during sexual activity can reduce a person’s risk for syphilis, Barbee said. Abstaining from sex or being in a mutually monogamous relationship with an uninfected partner are two more ways to reduce your risk of developing syphilis.

Pregnant women should be screened for syphilis at least once during pregnancy, according to the CDC. This blood test is usually done during the first prenatal visit, but for pregnant women at high risk for syphilis, the screening may be repeated again during the third trimester.

Men who have sex with men are advised to have a syphilis screening at least once a year or more frequently if those men have multiple sex partners, the CDC recommends.