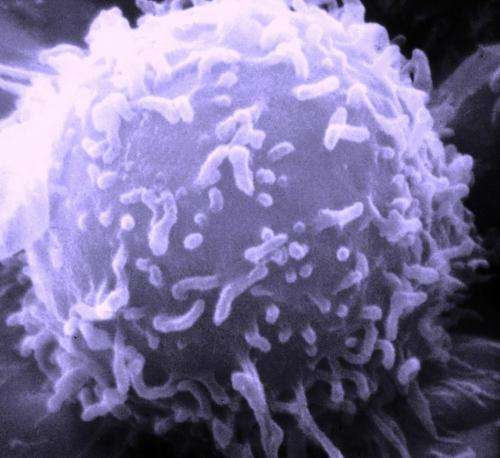 A new chemical compound with the potential to destroy hard-to-treat cancer cells has been developed and tested by scientists at the University of Huddersfield.

Also, the compound causes remarkably little harm to healthy cells, meaning that the side effects traditionally associated with chemotherapy would potentially be significantly reduced.

At this early stage of its development, the compound, which contains the rare metal ruthenium, is generating exciting results in the laboratory, but there are significant challenges ahead before it enters clinical trial. Nevertheless, research conducted by a team of chemists, biologists and pharmacists at the University’s School of Applied Sciences is to continue, the ultimate aim being to get these compound or a derivative into clinical trial.

The breakthrough is described in an article published by the leading international journal Angewande Chemie. One of the authors is Professor Craig Rice, head of the University’s Department of Chemistry. He originally created the ruthenium – containing compound as an academic exercise, but then he and Roger Phillips, who is Professor of Cancer Pharmacology, decided to test it for toxicity to cancer.

An important aspect of the new compound is that its molecular backbone has an eliciting twist and this is important for its activity. Professor Rice explained that both helical and non-helical versions had been created and it was found this changed the selectivity of the compound, with the former being the most effective.

It was discovered that the compound can target and destroy cells that lack the gene named p53. This gene is known as “the guardian of the genome,” and it protects normal cells from abnormalities and DNA damage, said Professor Phillips.

“It is frequently mutated in cancer and loss of p53 function has significant biological impact including resistance to currently available anticancer drugs,” he added.