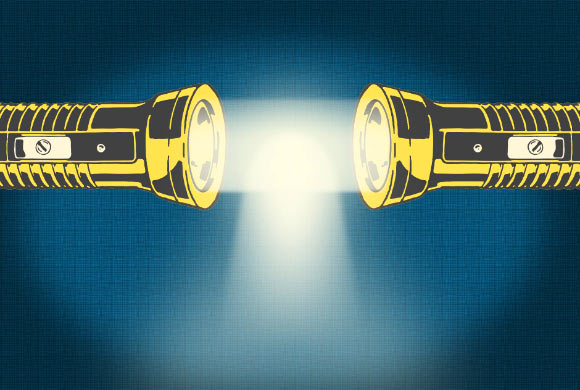 A team of physicists from the Massachusetts Institute of Technology (MIT) and elsewhere has created a new kind of photonic matter that could enable quantum computing with particles of light.

Bound states of massive particles, such as nuclei, atoms, or molecules, constitute the bulk of the visible world around us.

MIT Professor Vladan Vuletic and colleagues have now demonstrated that photons can indeed be made to interact — an accomplishment that could open a path toward using photons in quantum computing, if not in light sabers.

“Photons can travel very fast over long distances, and people have been using light to transmit information, such as in optical fibers,” Professor Vuletic said.

“If photons can influence one another, then if you can entangle these photons, and we’ve done that, you can use them to distribute quantum information in an interesting and useful way.”

In a paper published in the journal Science, the researchers report that they have observed groups of three photons interacting and, in effect, sticking together to form a completely new kind of photonic matter.

In controlled experiments, they found that when they shone a very weak laser beam through a dense cloud of ultracold rubidium atoms, rather than exiting the cloud as single, randomly spaced photons, the photons bound together in pairs or triplets, suggesting some kind of interaction — in this case, attraction — taking place among them.

While photons normally have no mass and travel at 300,000 km per second, the researchers found that the bound photons actually acquired a fraction of an electron’s mass.

“Our results demonstrate that photons can indeed attract, or entangle each other,” Professor Vuletic said.

“If they can be made to interact in other ways, photons may be harnessed to perform extremely fast, incredibly complex quantum computations.”

“The interaction of individual photons has been a very long dream for decades,” he added.

Going forward, the authors will look for ways to coerce other interactions such as repulsion, where photons may scatter off each other like billiard balls.

“It’s completely novel in the sense that we don’t even know sometimes qualitatively what to expect,” Professor said.

“With repulsion of photons, can they be such that they form a regular pattern, like a crystal of light? Or will something else happen? It’s very uncharted territory.”