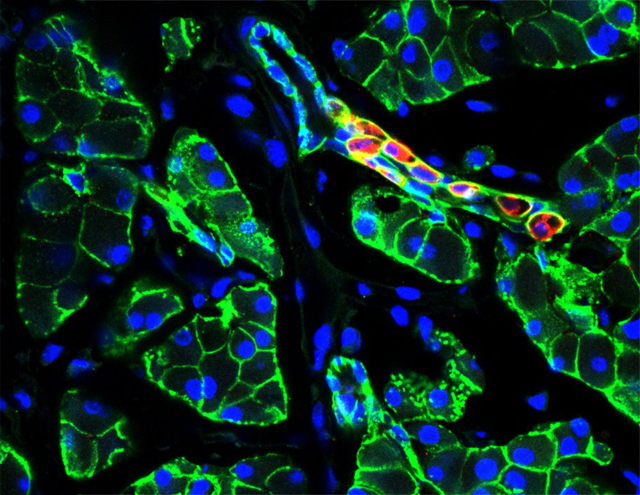 One strategy to treat type 1 diabetes, where the immune system destroys insulin-producing β cells, is to convert other cells into β-like cells that then take over insulin production. In a study published today (May 2) in Molecular Therapy, researchers reprogrammed pancreatic duct cells in vivo to successfully treat both genetically and chemically induced diabetes in mice.

“The work is part of a long line of studies attempting to genetically engineer insulin-producing cells in various tissues,” says Jake Kushner, a pediatric endocrinologist at Baylor College of Medicine in Houston who did not participate in the study. “It’s an exciting advance because it refines our understanding of what the capacity is of the various different components of either the pancreas or the liver to be transduced and make insulin-producing cells.”

Previous work had shown that both liver and pancreas cells could be converted into insulin-producing cells. Thus, Yuhan Wang, then a graduate student in Markus Grompe’s lab at Oregon Health & Science University, and colleagues set out to determine which of these cell types would make the best β-like cells.

In the latest study, the researchers intravenously injected diabetic mice with a virus loaded with the genes for Pdx1, Neurog3, and Mafa—transcription factors that had already been shown to reprogram cells to a β-like state. The team first targeted the mice’s liver cells, called hepatocytes, and found that after the injection, the hepatocytes that were altered by the transcription factors initially made insulin and could reduce levels of high blood sugar in the mice. But the cells did not respond appropriately to low glucose levels by turning off insulin production, and their ability to make insulin didn’t last, so the mice ended up with high blood sugar again. The hepatocytes also did not express characteristic β-like genes, suggesting that they were not truly reprogrammed.

“There is now growing evidence, from many different groups, that at least some specific sub-populations of cells within the pancreatic ducts can be induced to regenerate [β cells]. This could have important therapeutic implications,” Juan Domínguez-Bendala, who studies pancreatic development at the University of Miami Miller School of Medicine and did not participate in the work, writes in an email to The Scientist. “However, the use of viruses to induce this conversion is a form of gene therapy that has a very steep path to clinical approval. No matter how careful we are with viruses, they tend to elicit immune responses and create havoc wherever they land their cargo.”

Susan Bonner-Weir, a diabetes researcher at Harvard University who was not involved in the study, points out that this type of injection in people could result in inflammation of the pancreas and that, even if new β-like cells are made, they likely will be destroyed by the immune system in patients with type 1 diabetes. “It’s really a violent destructive force,” she says.

“The fear that many of us have is that if you come up with an endless supply of β-like cells, and you don’t find a way to permanently and safely reeducate the immune system, you’re going to create fuel for the autoimmune fire,” Kushner says.

Wang, who is now a postdoc at HHMI Janelia Research Campus, acknowledges these concerns and says the group plans to explore alternative delivery methods for the transcriptions factors, evaluate safety, and investigate the role that autoimmunity could play in the approach.

“We have some solid functional data showing that these cells can be reprogrammed in vivo and reverse the diabetes in these animal models,” she says. “We hope our future work will provide us additional information to address the question [of] whether this would be a valid approach for clinical treatment.”