Puffins are donning sexy little sunglasses in the name of science 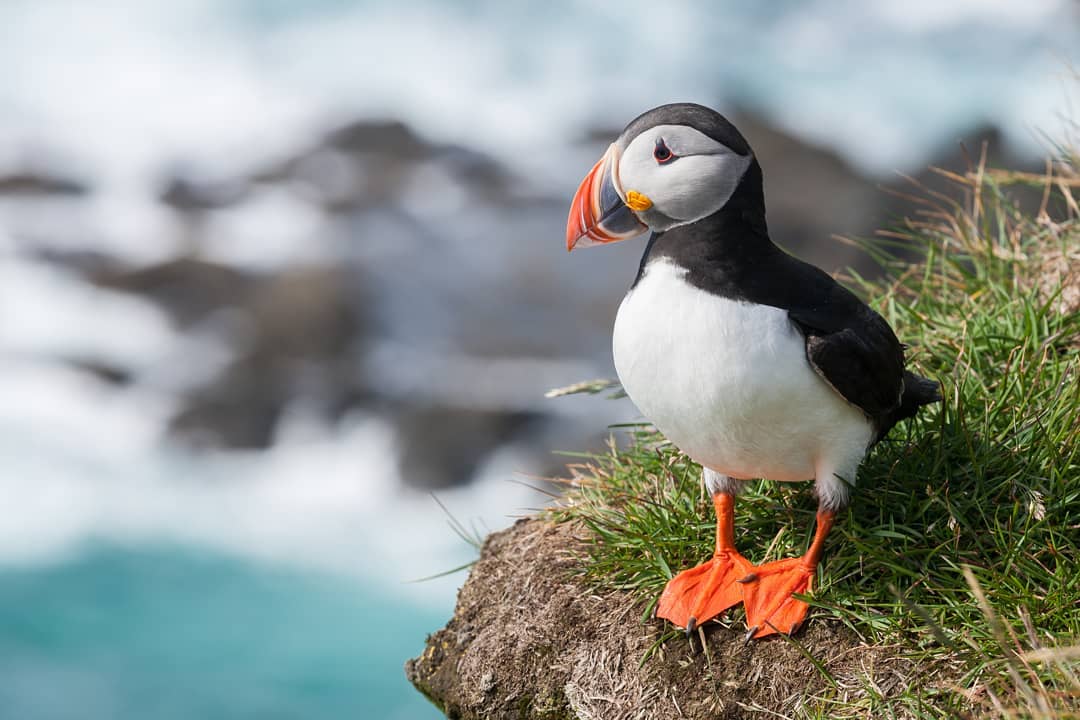 Puffins are donning sexy little sunglasses in the name of science

The eyewear can help us understand the puffin perspective.

Puffins don’t need sunglasses. Despite the glare off the shining sea and snow, these lil birds have managed to survive for many years without the aid of fashionable eyewear.

It is scientists, not puffins themselves, who have opted to design a tiny pair of yellow aviators and perch them gently upon the legendary puffin beak in order to shade their eyes from oncoming UV light. The scientist in question: Jamie Dunning, an ornithologist at the University of Nottingham.

Dunning already knew that crested auklets, another kind of seabird with a much crazier look to them, have beaks that fluoresce when placed under UV light. Why not puffins? He was a man with a hunch and, as he told Newsweek, also “the kind of guy that people send dead birds to.” That’s not a vote of confidence in most circles, but in the ornithology world it means you’ve got a bunch of frozen specimens stashed away for testing such hunches.

Sure enough, when he plopped a puffin under the UV light, its beak glowed.

Auklets aside, that’s actually not super surprising. We think of things that show up under black light as secret, hidden messages, but that’s only because our eyes don’t perceive UV light as visible. Birds do. Or some birds, anyway.

The cones in our eyes—the cells that detect color—only pick up certain wavelengths of light. We can see red all the way through violet, but other animals can see different portions of the electromagnetic spectrum. Plenty of birds have plumage with ultraviolet markings that we don’t see, but their compatriots do. That’s because birds have four cones instead of just three, and that bonus cone allows them to interpret UV light as visible. To puffins, it probably doesn’t look the way it looks to us under black light. We literally cannot imagine what color UV looks like, because our understanding of color comes from the section of the electromagnetic spectrum that we see. UV light probably has a ‘color’ that’s not related to any color we understand. But to birds, it’s just another feature of the world.

Like most bird markings, the UV stripes on the Atlantic puffin’s beak probably serve to get s it laid. Bird markings are one of the most obvious examples of sexual selection; Lady birds pick the males with the brightest, most colorful plumage (or beaks, in this case), and over time the whole species develops a more extravagant look. This is also why female birds are fairly drab. They don’t have to dress up—they’re the ones picking the mates.

But all that being said, we don’t actually know why puffins have UV markings on their beaks. It’s probably do to with sex, we’re just not sure. So far Dunning has only put dead puffins under his black light. He had to get those little glasses designed so he could devise an experiment for live puffins. There’s always a chance that something about the degradation process makes dead puffin beaks glow, and that live ones don’t have such vivid markings.

We won’t know for sure until he puts sunglasses on living puffins.

“Eyewear for animals” is not a large avenue of scientific inquiry, but this is still not the first time we’ve created tiny sunglasses for a bird. Researchers did it for parrotletsto protect their little eyes as they flew through a laser field. These weren’t scary lasers like in spy movies, but lasers designed to assess air flow to figure out how birds support their own body weight. Since the lasers could damage their eyesight, they got tiny protective goggles.

Scientists have also made glasses for praying mantises to prove they could see in 3D (spoiler alert: they can, and they look adorable in glasses).

And for those of you worried about the ethics of strapping eyewear to unsuspecting birds, rest assured that no critters were harmed in these processes. Dunning’s puffin glasses will rest lightly on their beaks and will only protect their eyes from damage from such direct UV light. In the process, we’ll learn more about how puffins navigate their world, and that in turn could help us save them. Atlantic puffins are endangered due to invasive species, pollution, and overfishing by humans.

If fixing them up in tiny sunglasses could help them, we should be all for it. The fact that it’s adorable is just a bonus.