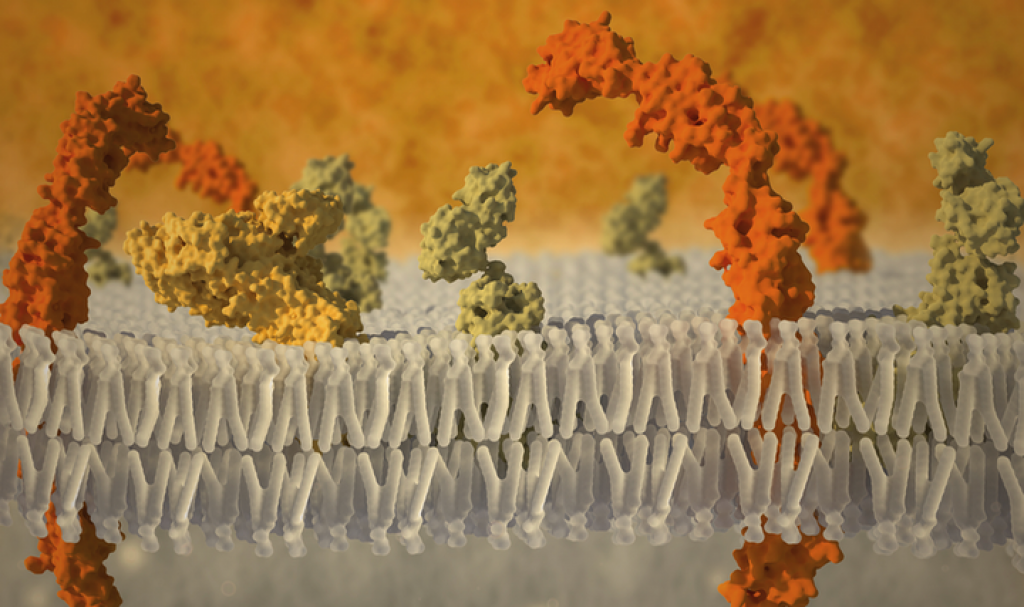 Scientists have developed a bioimaging technique that allows the prolonged visualization of complex protein movements in a cell membrane.

AsianScientist (Apr. 16, 2018) – Scientists at the Okinawa Institute of Science and Technology (OIST) have developed a method to directly observe the movements of proteins in cell membranes. They published their findings in Nature Chemical Biology.

Every cell in your body is enclosed by a cell membrane, a lipid bilayer that separates the cell’s contents from its surroundings. Residing within the cell membrane itself, molecules move around like ballet dancers on a stage.

To understand how these proteins move within the membrane and how they interact with each other, a research group led by Professor Akihiro Kusumi of OIST developed an imaging method for live cells, called live-cell single fluorescent-molecule imaging (SFMI). In SFMI, each protein ‘dancer’ in the membrane is individually tagged with fluorescent markers to make them visible under special custom-built fluorescence microscopes

However, SFMI can be problematic: over time, fluorescent markers lose their glow, a process known as photobleaching. Because of this, cell biologists had been unable to observe individual molecules for longer than about ten seconds at a time.

“It was like randomly taking many ten-second long clips and trying to connect them in the correct order to produce a movie lasting for five minutes,” said Mr Taka-aki Tsunoyama, a researcher from the Membrane Cooperativity Unit at OIST.

Hence, Tsunoyama, Kusumi and their colleagues used a combination of chemicals and molecular oxygen in the specimen to prevent photobleaching. Previous methods used to prolong the fluorescent lifespan of molecular labels were not very effective and were usually toxic to living cells because they tended to remove molecular oxygen.

To solve the issue of photobleaching, the OIST researchers placed the cells in an environment with low oxygen concentrations, which mimics the real conditions inside a living organism, and added two mild chemicals called trolox and trolox quinone. This combination was effective at reducing photobleaching without reducing the viability of the cells. This approach allowed the researchers to observe individual molecules in living cells for up to 400 seconds

“Our method improves the observation time of fluorescent molecules by forty-fold,” said Kusumi

With the increased time window of observation, the researchers were able to study how molecules work in the cell far more directly and clearly. They studied specific regions of the membrane known as focal adhesions, which Kusumi called the ‘feet of the cell.’ Cells use these feet to get around, and such movements are involved in cancer metastasis, where cancer cells leave the primary tumor and migrate through the body.

The researchers studied a group of proteins within the focal adhesion called integrins, which link the internal skeleton of the cell to the extracellular matrix. Previously, it was assumed that integrins are solidly fixed within the cellular feet. However, the extended observation time allowed the researchers to clearly see that integrin molecules repeatedly move and stop within the cellular feet, and even migrate between feet.

Using their technique, the researchers can record long videos of protein movements in the cell membrane without interruption.

“With our method, we can now follow the movement of each individual molecular dancer for sufficiently long periods of time to understand the cellular context,” said Kusumi, adding that by shedding light on the behavior of focal adhesion proteins, researchers could one day develop drugs that stop cancer cells from migrating through the body.

Source: Okinawa Institute of Science and Technology Graduate University. Disclaimer: This article does not necessarily reflect the views of AsianScientist or its staff.