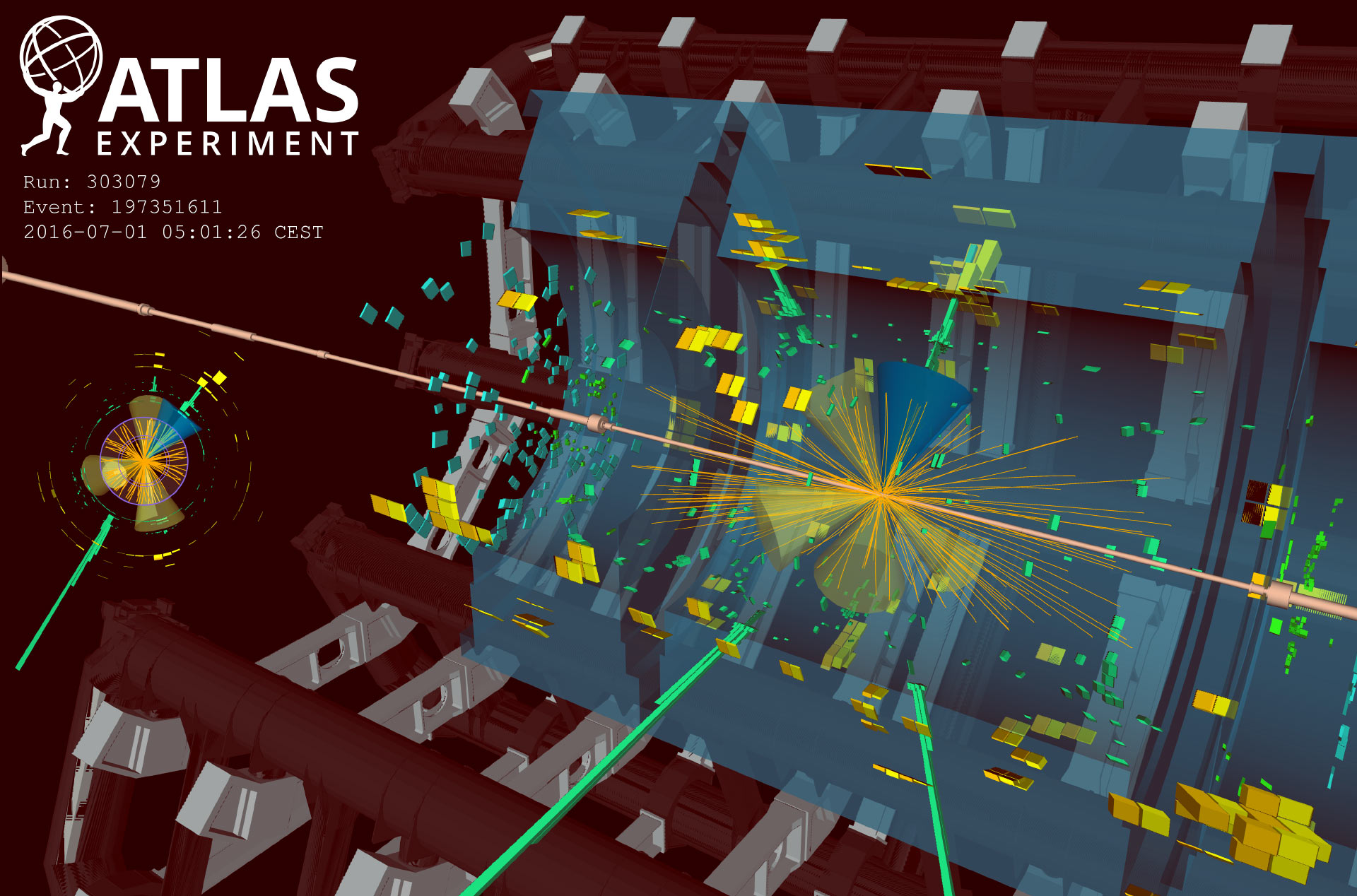 In July 2012, ATLAS (A Toroidal LHC ApparatuS) and CMS (Compact-Muon-Solenoid) experiments at CERN’s Large Hadron Collider jointly announcedthe discovery of the Higgs boson. The discovery confirmed the existence of the last missing elementary particle of the Standard Model, five decades after it was predicted theoretically. New results from ATLAS and CMS experiments reveal how strongly the Higgs boson interacts with the heaviest known elementary particle, the top quark. Observing this rare process is a significant milestone for the field of high-energy physics; it allows physicists to test critical parameters of the Higgs mechanism in the Standard Model.

The Higgs boson interacts only with massive particles, yet it was discovered in its decay to two massless photons.

Quantum mechanics allows the Higgs to fluctuate for a very short time into a top quark and a top antiquark, which promptly annihilate each other into a photon pair.

The probability of this process occurring varies with the strength of the interaction (known as coupling) between the Higgs boson and top quarks. Its measurement allows physicists to indirectly infer the value of the Higgs-top coupling.

However, undiscovered heavy new-physics particles could likewise participate in this type of decay and alter the result. This is why the Higgs boson is seen as a portal to new physics.

A more direct manifestation of the Higgs-top coupling is the emission of a Higgs boson by a top-antitop quark pair.

The new results from CMS and ATLAS collaborations describe the observation of this so-called ‘tt¯H production’ process.

The findings are consistent with one another and with the Standard Model, and give scientists new clues for where to look for new physics.

“While this is certainly a key feature of the Standard Model, this is the first time it has been verified experimentally with overwhelming significance.”

Measuring this process is challenging, as it is rare: only 1% of Higgs bosons are produced in association with two top quarks and, in addition, the Higgs and the top quarks decay into other particles in many complex ways, or modes.

To maximize the sensitivity to the experimentally challenging tt¯H signal, each experiment then combined the results from all of its searches.

“When ATLAS and CMS finish data taking in November of 2018, we will have enough events to challenge even more strongly the Standard Model prediction for tt¯H, to see if there is an indication of something new.”

The new results from the CMS experiment were published this week in the journal Physical Review Letters (arXiv.org preprint).

The results from the ATLAS experiment will appear in the journal Physics Letters B (arXiv.org preprint).

M. Aaboud et al (ATLAS Collaboration). 2018. Observation of Higgs boson production in association with a top quark pair at the LHC with the ATLAS detector. Physics Letters B, in press; arXiv: 1806.00425