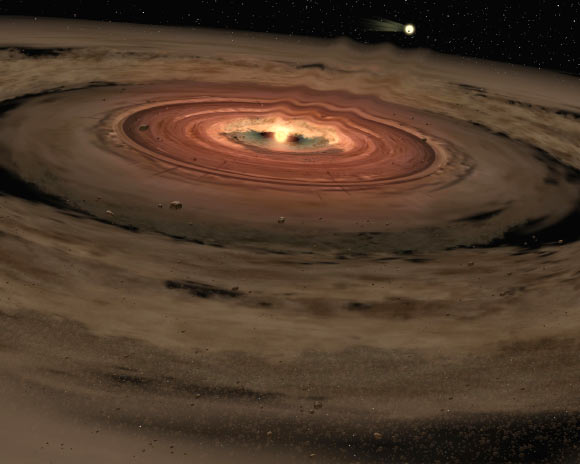 A close flyby of a Sun-mass star several billion years ago could explain some unusual features observed in the outer Solar System.

“We’ve been looking for years at what flybys can do to other planetary systems never considering that we actually might live right in such a system,” said lead author Dr. Susanne Pfalzner, of the Max-Planck-Institut für Radioastronomie.

Solar system planets formed from a gas-dust disk. However, there are some properties of our Solar System that are peculiar in this context.

“Due to the flatness of the disk one would expect that the planets orbit in a single plane unless something dramatic happened afterwards,” Dr. Pfalzner and colleagues said.

“Looking at the Solar System right to the orbit of Neptune everything seems fine: most planets move on fairly circular orbits and their orbital inclinations vary only slightly. However, beyond Neptune things become very messy.”

“The biggest puzzle is the dwarf planet Sedna, which moves on an inclined, highly eccentric orbit and is so far outside, that it could not have been scattered by the planets there.”

“Just outside Neptune’s orbit another strange thing happens. The cumulative mass of all the objects dramatically drops by almost three orders of magnitude. This happens at approximately the same distance where everything becomes messy. It might be coincidental, but such conincidences are rare in Nature.”

The team suggests that a neighboring star was ‘approaching the Sun at an early stage, stealing most of the outer material from the Sun’s protoplanetary disk and throwing what was left over into inclined and eccentric orbits.’

Using massive computer simulations, the astronomers checked what would happen when a star passes very close-by and perturbs the once larger disk.

“It turned out that the best fit for the outer Solar System comes from a perturbing star which had the same mass as the Sun or somewhat lighter (0.5-1 solar masses) and flew past at approximately 3 times the distance of Neptune,” they said.

“However, the most surprising thing was that a flyby does not only explain the strange orbits of the objects of the outer Solar System, but also gives a natural explanation for several unexplained features of our Solar System, including the existence of two distinct populations of Kuiper Belt objects and the puzzling fact that Neptune has a higher mass than Uranus.”

“It is important to keep exploring all the possible avenues for explaining the structure of the outer Solar System,” said co-author Dr. Pedro Lacerda, of the Queen’s University in Belfast.

“The data are increasing but still too sparse, so theories have a lot of wiggle room to develop.”

“There is a certain danger that one theory crystallizes as truth, not because it explains the data better but because of other pressures. Our paper shows that a lot of what we currently know can be explained by something as simple as a stellar flyby.”

The study was published in the Astrophysical Journal.