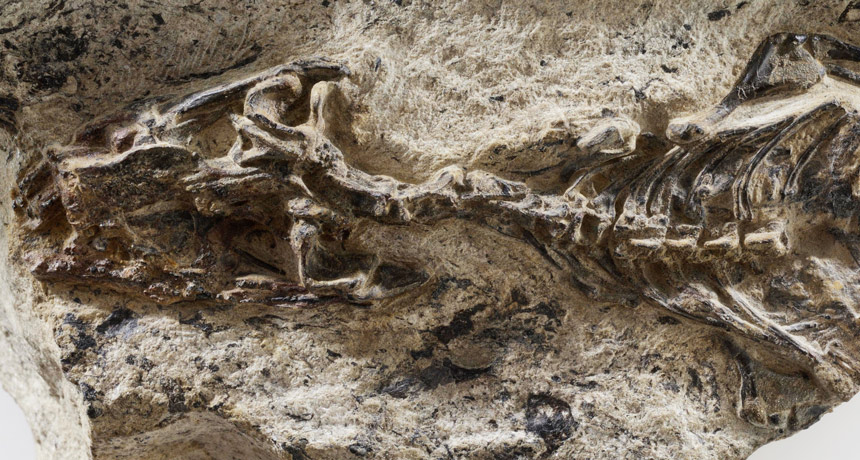 A little animal that washed out to sea 240 million years ago off the coast of what’s now Italy turns out to be the oldest known fossil of a lizard.

The identification pushes back the fossil record of snakes and lizards by about 75 million years, says Tiago Simões of the University of Alberta in Edmonton, Canada. He and colleagues used observations of the fossil, called Megachirella wachtleri, and of related living and extinct species plus genetic data to reconstruct the evolutionary history of squamates, the reptile group that today includes snakes and lizards, the researchers report in the May 31 Nature.

“Understanding lizard and snake evolution has been a constant problem in paleontology,” says vertebrate paleontologist Stephanie Pierce of Harvard University who worked on the issue years ago but wasn’t involved in the new study. The trouble comes largely from a lack of relevant fossils, she says. That dearth isn’t just because little animals don’t fossilize as readily as big ones do. “Things like giant dinosaurs — they’re pretty easy to spot,” she says. “But if you’re looking for something that can fit in the palm of your hand, that makes it very challenging.”

A collector found M. wachtleri almost 20 years ago in a part of the Italian Alps that had once been underwater. But researchers didn’t categorize it as a full member of the squamate branch of reptiles, until now. The sole specimen is partly embedded in rock, which obscured some of the creature’s telltale features. Now a CT scan has revealed previously unknown squamate details of its palate, braincase, limbs and shoulder, Simões says.M. wachtleri was a small, terrestrial animal with teeth appropriate for snapping up insects, he says. Yet a catastrophe such as a tropical storm apparently swept it out to sea along with masses of leaves.

Besides taking a closer look at M. wachtleri, Simões and some colleagues traveled to 17 countries from Brazil to China to reexamine the other known squamate fossils. Combining all of the new fossil measurements with DNA data, the researchers reconstructed the evolutionary tree of squamates. Among the new insights: Geckos appear to be the most ancient of still-surviving lizards, the team found. And iguanas, a hard-to-place group on the tree, have a more recent origin than some other studies have found.

“The picture is coming together,” says study coauthor Oksana Vernygora, an evolutionary biologist also at the University of Alberta.

Previously, the oldest known squamate fossils dated back about to 168 million years ago. Adding M. wachtleri to the mix means that the squamates are so ancient that they arose before the mass extinction at the end of the Permian Period 252 million years ago, notes herpetologist and evolutionary biologist Jeff Streicher of the Natural History Museum in London who was not involved in the study. That cataclysm came the closest (yet) to wiping out life on Earth. How the ancestors of modern lizards and snakes made it is still a matter of debate.