More than half the world’s ocean area is actively fished 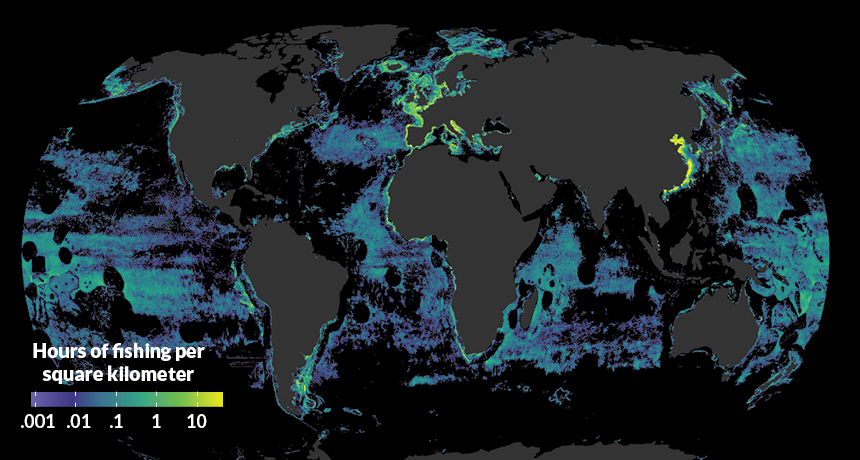 More than half the world’s ocean area is actively fished

New mapping highlights location — and intensity — of those fishing efforts

People’s taste for seafood affects a surprisingly large share of Earth’s oceans. That’s according to a new study that mapped where marine fish are harvested.

Oceans cover more than two-thirds of the planet’s surface. In 2016, fishing fleets used more than 55 percent of the ocean’s area, the new study shows. In contrast, only about one-third of Earth’s land area supports agriculture or livestock grazing. That means that catching fish uses four times as much of the Earth’s surface as all the food plants and animals grown on land!

Fishing vessels have plied the oceans for hundreds of years to catch fish. Data about where they fished and how much time they spent at sea have been scarce and inconsistent. Now, though, most large ships have a tracking system. It’s meant to help them avoid collisions. Called an automatic identification system, or AIS, it sends out data on where vessels are and how fast they are moving.

Fourteen researchers from universities, Google and other groups used these data to map fishing throughout the seas. For their new study, they examined 22 billion AIS data points between 2012 and 2016. The team trained computers to sort through all of those data. They turned up more than 70,000 fishing vessels. Then, the researchers tracked the ships’ activity — their time at sea. The researchers reported the results February 23 in Science.

Fish are drawn to areas where nutrient-rich deep water rises toward the surface. This one is near the east coast of South America. These areas are also popular fishing spots. Here, the colored dots show the average hours of fishing within an area spanning one square kilometer (0.4 square mile). | Global Fishing Watch

Much fishing takes place close to coastlines. This isn’t surprising, because countries can claim exclusive rights to fish in waters closest to their own shores.

A few fishing hot spots were farther out in the open ocean, the team found. One such spot was the northeastern Atlantic Ocean, around Europe. Others were off the coasts of South America and West Africa. In those areas, cold, nutrient-rich water rises toward the surface from the deep ocean. The nutrients in that upwelling water helps nourish large populations of fish.

Surprisingly, just five nations dominated those fishing spots in the open ocean. China, Spain, Taiwan, Japan and South Korea accounted for nearly 85 percent of this fishing on the high seas. The affected areas do not belong to any one country. This means that they can be especially vulnerable to overfishing.

Understanding the extent of ocean fishing is important, the researchers note. So is knowing how fishing varies over space and time. This information might help identify spots that need protection. And it could guide international efforts to safeguard fish populations. That may be particularly important in a time of rapid ocean change. For example, ocean water temperatures are rising. This has caused some fish populations to migrate to new sites. Meanwhile, fishing activity on the seas has also been increasing.

In 2016, just five nations were responsible for nearly 85 percent of observed fishing activity in international waters. These areas, which are not controlled by any single country, can be particularly vulnerable to overfishing. Tap each circle for more details.

agriculture     The growth of plants, animals or fungi for human needs, including food, fuel, chemicals and medicine.

Atlantic     One of the world’s five oceans, it is second in size only to the Pacific. It separates Europe and Africa to the east from North and South America to the west.

data     Facts and/or statistics collected together for analysis but not necessarily organized in a way that gives them meaning.

information     (as opposed to data) Facts provided or trends learned about something or someone, often as a result of studying data.

marine     Having to do with the ocean world or environment.

migrate     To move long distances (often across many countries) in search of a new home. (in biology) To travel from one place to another, often at regular times of the year, to find food or more hospitable conditions (such as better weather).

nutrient     A vitamin, mineral, fat, carbohydrate or protein that a plant, animal or other organism requires as part of its food in order to survive.

population     (in biology) A group of individuals from the same species that lives in the same area.

sea     An ocean (or region that is part of an ocean). Unlike lakes and streams, seawater — or ocean water — is salty.

upwelling     The process by which material rapidly and forcefully rises up from below.