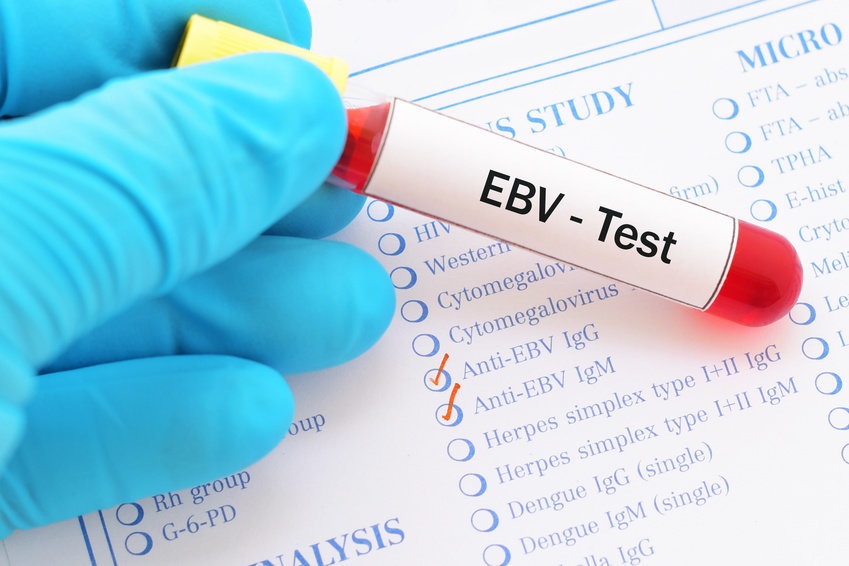 Epstein-Barr virus may affect health in more ways than known

A far-reaching study conducted by scientists at Cincinnati Children’s reports that the Epstein-Barr virus (EBV) — best known for causing mononucleosis — also increases the risks for some people of developing seven other major diseases.

Study results published April 12 in the journal Nature Genetics. The project was led by three scientists: John Harley, MD, PhD, Director of the Center for Autoimmune Genomics and Etiology (CAGE) at Cincinnati Children’s and a faculty member of the Cincinnati VA Medical Center; Leah Kottyan, PhD, an immunobiology expert with CAGE; and Matthew Weirauch, PhD, a computational biologist with the center. Critical contributions were provided by Xiaoting Chen, PhD, and Mario Pujato, PhD, both also in CAGE.

The study shows that a protein produced by the Epstein-Barr virus, called EBNA2, binds to multiple locations along the human genome that are associated with these seven diseases.

Overall, the study sheds new light on how environmental factors, such as viral or bacterial infections, poor diet, pollution or other hazardous exposures, can interact with the human genetic blueprint and have disease-influencing consequences.

“Now, using genomic methods that were not available 10 years ago, it appears that components made by the virus interact with human DNA in the places where the genetic risk of disease is increased,” Harley says. “And not just for lupus, but all these other diseases, too.”

The full impact of this study could take years to explore. Here are some of the initial implications:

New concern about the ‘kissing disease’

Mononucleosis, which causes weeks of extreme fatigue, is the most common illness caused by EBV. Mono was nicknamed the “kissing disease” years ago because the virus spreads primarily via contact with saliva.

Over the years, scientists have linked EBV to a few other rare conditions, including certain cancers of the lymphatic system. Harley, who has devoted much of his career to studying lupus, found possible connections between lupus and EBV years ago. That work includes proposing mechanisms that the immune system uses in response to the virus that lead to lupus, and showing that children with lupus almost always are infected with EBV.

“This discovery is probably fundamental enough that it will spur many other scientists around the world to reconsider this virus in these disorders,” Harley says. “As a consequence, and assuming that others can replicate our findings, that could lead to therapies, ways of prevention, and ways of anticipating disease that don’t now exist.” So far, no vaccine exists that will prevent EBV infection.

“I think we’ve come up with a really strong rationale for encouraging people to come up with more of an effort,” Kottyan says. “Some EBV vaccines are under development. I think this study might well encourage them to push forward faster and with rededicated effort.”

How EBV hijacks our immune system

When viral and bacterial infections strike, our bodies respond by commanding B cells within our immune systems to crank out antibodies to battle the invaders. However, when EBV infections occur, something unusual happens.

The EBV virus invades the B cells themselves, re-programs them, and takes over control of their functions. The Cincinnati Children’s research team has discovered a new clue about how the virus does this, a process that involves tiny proteins called transcription factors.

Our bodies have about 1,600 known transcription factors at work within our genome. Each cell uses a subset of these to become what they are and to respond to their environment. These proteins constantly move along the strands of our DNA, turning specific genes on and off to make sure cells function as expected.

However, when the transcription factors change what they do, the normal functions of the cell can also change, and that can lead to disease. The Cincinnati Children’s team suspects that the EBNA2 transcription factor from EBV is helping change how infected B cells operate, and how the body responds to those infected cells.

“Normally, we think of the transcription factors that regulate human gene expression as being human,” Kottyan says. “But in this case, when this virus infects cells, the virus makes its own transcription factors, and those sit on the human genome at lupus risk variants (and at the variants for other diseases) and that’s what we suspect is increasing risk for the disease.”

It remains unclear how many cases of the seven diseases listed in the study can be traced to prior EBV infection. More genomic analyses involving many more patients with these diseases will be required to make reliable estimates.

“The impact of the virus is likely to vary across the diseases,” Harley says. “In lupus and MS, for example, the virus could account for a large percentage of those cases. We do not have a sense of the proportion in which the virus could be important in the other EBNA2-associated diseases.”

However, the breakthrough identification of specific transcription factors connected to EBV infections opens new lines of study that could accelerate efforts to find cures.

“This same cast of characters is a villain in multiple immune-related diseases,” Weirauch says. “They’re playing that role through different ways, and doing it at different places in your genome, but it’s the same sinister characters. So if we could develop therapies to stop them from doing this, then it would help multiple diseases.”

A number of compounds — some experimental, some approved as medications for other conditions — already are known to be capable of blocking some of the high-risk transcription factors listed in the paper, Weirauch says. Teams at Cincinnati Children’s have begun deeper studies of some of these compounds.

While the EBV-related findings involved more than 60 human proteins linked to seven diseases, the Cincinnati Children’s research team already has taken a huge next step. They applied the same analytic techniques to tease out connections between all 1,600 known transcription factors and the known gene variants associated with more than 200 diseases.

“Our study has uncovered potential leads for many other diseases, including breast cancer,” Harley says. “We cannot possibly follow up on all of these, but we are hoping that other scientists will.”

After devoting decades of research to hunting down the causes of lupus, Harley says this study represents the most important discovery of his career. “I’ve been a co-author in almost 500 papers. This one is more important than all of the rest put together. It is a capstone to a career in medical research,” he says.

Software behind discoveries to be made public

Detecting and tracking the activities of these transcription factors took years of work involving dozens of laboratory and computational experts.

The project required gathering massive sets of genetic data, then analyzing every genetic change affecting the activity of the virus. Doing this required creating two new algorithms, called RELI and MARIO, which were developed at Cincinnati Children’s by Weirauch and colleagues.

Both software tools and a related website will be made publicly available.

“We are going to great lengths to not only make the computer code available, but all of the data and all of the results,” Weirauch says. “We think it’s an interesting approach that could have implications for many diseases, so we’re contacting experts on the various diseases and sharing the results and seeing if they want to collaborate to follow up on them.”

What is the Epstein-Barr virus?

The Epstein-Barr virus (EBV) is an extremely common virus usually spread by saliva. EBV causes mononucleosis, and has been associated with a growing number of other diseases. A study led by Cincinnati Children’s, published today in Nature Genetics, adds seven diseases to that list.

Also known as “mono,” and nicknamed the “kissing disease,” the symptoms of this condition include extreme fatigue, fever, sore throat, head and body aches, swollen lymph nodes in the neck and armpits, swollen liver or spleen or both, and rash, according to the Centers for Disease Control and Prevention. Most people get better in two to four weeks. However, some people may feel fatigued for several more weeks.

What is a B cell?

B cells are a type of white blood cell found in the immune system. These cells produce antibodies in reaction to infections by bacteria, viruses and other invaders. Epstein-Barr virus infects a small proportion of these cells.

What is a transcription factor?

Transcription factors are proteins that “turn on and turn off” genes. These proteins help direct cell growth, division, and death. They also control cell migration and organization. There are about 1,600 known human transcription factors that do their work along the human genome. These proteins change the expression of genes to make RNA, which in many cases results in forming other proteins that change how cells form and function.

What is a DNA variant?

The DNA genome of every person contains over 3 billion DNA bases. Most of the bases are exactly the same for every person. However, about 1 percent of the bases can be different and these create diversity between people. The variants can change the way proteins are made or change the regulatory processes that lead to protein production.

What is a genetic risk variant?