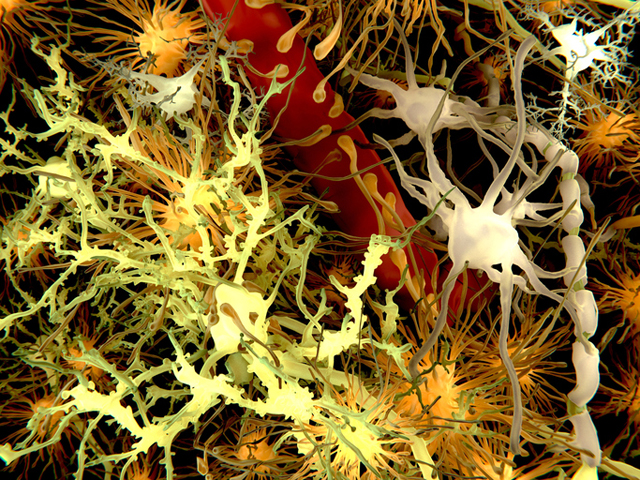 Researchers find a link between molecules released by commensal bacteria and the degree of inflammation in a mouse model of MS.

The gut-brain axis is line of communication between the two organs, involved in everything from brain development to the progression of neurological diseases, with gut microbiota often pitching in to the conversation. In a study published today (May 16) in Nature, researchers present evidence that multiple sclerosis (MS) may also be influenced by commensal microbes in the gut acting upon cells in the brain. They show in a mouse model of the disease that metabolites from gut bacteria alter the behavior of microglia—immune cells that reside in the brain—which in turn regulate the activity of astrocytes to promote or prevent inflammation.

The authors also found evidence in vitro and in patient samples that a similar gut-brain connection exists in people with MS, suggesting that microbes and the cells that receive their signals could be targets for disease treatment.

“The beauty of this paper is that it provides a very detailed mechanistic understanding of how things work,” Jonathan Kipnis, a neuroscientist at the University of Virginia who did not participate in the study, tells The Scientist. Previous research linked the microbiome and the development of MS in mice, he says, but “we never understood how the gut communicates with the brain.”

In work published in Nature Medicine in 2016, Francisco Quintana of Brigham and Women’s Hospital in Boston and colleagues found part of the answer to the question of gut-brain communication. In that study, they showed that mouse and human astrocytes—star-shape glial cells—respond to molecules generated by microbes from the intestine. And because prior work from other groups had demonstrated that microglia can regulate astrocyte behavior, Quintana says, “one of the biggest unanswered questions we had is: what mediates the crosstalk between microglia and astrocytes?”

In the current study, the researchers induced mice to develop experimental autoimmune encephalomyelitis, a model of MS. These mice lose the protective myelin coating around their axons and have extensive inflammation of the central nervous system (CNS) and neurodegeneration. The authors identified two molecules, TGFα and VEGF-B, that mouse microglia secrete. They found that these proteins bind to receptors on the astrocyte surface and modulate the astrocytes’ behavior, meaning they play a role in the crosstalk between astrocytes and microglia. What’s more, in the mouse model of MS, “VEGF-B seems to boost pathogenic or pro-inflammatory responses of astrocytes, while TGFα does exactly the opposite,” Quintana says.

Quintana and colleagues next looked into what signals mediate the changes they observed in TGFα and VEGF-B. In their 2016 work, the team found that microbial metabolites of the amino acid tryptophan interact with a receptor—the aryl hydrocarbon receptor (AHR)—that functions as a transcription factor in astrocytes. Previous work from other groups has shown that microglia also possess AHR, suggesting that metabolites released by animals’ gut microbes could be interacting with AHR and driving the variation in TGFα and VEGF-B expression and thus the communication between microglia and astrocytes.

To test the influence of microbial metabolites on the microglia, the authors fed the rodents a diet that had been depleted of tryptophan. The animals’ microglia produced pro-inflammatory VEGF-B, which activated the astrocytes, and the mice displayed more symptoms of MS. When they added tryptophan back to the diet, the microglia released anti-inflammatory TGFα, tamping down astrocyte activity and improving the animals’ health.

Not only did the investigators show that gut metabolites could affect microglia, they showed that the brain cells pick up on those signals via AHR. The receptor regulates the production of TGFα and VEGF-B and thus levels of inflammation. In the absence of tryptophan or AHR, inflammation increased, the authors observed.

Quintana and colleagues also found evidence from cultured human microglia, astrocytes, and tissue samples from MS lesions that tryptophan metabolites, AHR, TGFα, and VEGF-B play a similar role in people as they do in mice.

The study makes a “quantum leap in understanding the role of the different nonneuronal cells in the brain under pathological conditions,” says Michal Schwartz, a neuroimmunologist at the Weizmann Institute of Science in Israel who did not participate in the study. “The notion that astrocytes can be inflammatory has been around for while, but I think the paper very nicely demonstrates it,” she says.

According to Shane Liddelow, a neuroscientist at New York University who was not involved in the study, the next steps focus on the role of astrocytes. “If microglia are driving some change in astrocytes, how is that changing that astrocyte’s function and how is it now interacting differently with other cells in the CNS?” he asks, adding that these questions are especially relevant in the context of MS and neurodegenerative diseases, such as Alzheimer’s.

Quintana agrees that investigating other neurological disorders, including spinal cord injury and traumatic brain injury, is a key future direction. “We are trying to understand in detail how these pathways operate and how we can modulate them therapeutically with antibodies, small molecules, and targeted probiotics that could activate the anti-inflammatory pathway,” he says.

The researchers also plan to take the work beyond the molecular players identified here. “We don’t think that AHR is the only pathway by which CNS resident cells sense microbial metabolites, and we do not believe that VEGF-B and TGFα are the only molecules that mediate the crosstalk between microglia and astrocytes,” Quintana says. “That’s something we are very actively working on.”