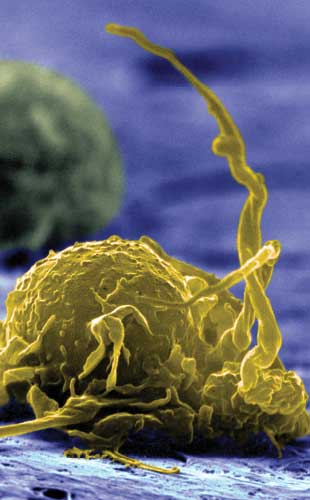 Macrophages play numerous roles within tumors, leaving cancer researchers with a choice: eliminate the cells or recruit them.

n the late 2000s, Stanford University stem cell biologist Irving Weissman wanted to understand how normal blood-forming stem cells differed from those that went on to seed a type of blood cancer called acute myelogenous leukemia (AML). Using bone marrow samples from AML patients who had survived the nuclear bombs dropped on Japan during World War II, his team identified the developmental stage at which blood-forming stem cells branch off to become cancerous and compared gene expression profiles between those cells and their counterparts from healthy bone marrow samples. The researchers found that the leukemia-forming stem cells highly expressed a gene encoding CD47, a surface molecule known for its role on normal, healthy cells as a “don’t eat me” signal to phagocytosing macrophages. Weissman and his colleagues had no clue how CD47 had gotten onto cancer cells, but they couldn’t ignore it. “The molecule was just staring us in the face,” he says.

The researchers looked at stem cells from AML patients at the Stanford Medical Center to see if they also expressed CD47. “They all did,” says Weissman. After demonstrating in cell culture experiments that macrophages only engulfed AML cells that did not display CD47 on their surface, Weissman’s team grew human AML cells in five immune-deficient mice and treated the animals with an antibody against CD47.1 In just two weeks, AML cells were nearly undetectable in the animals’ blood, and had dropped by 60 percent in their bone marrow. “It was shocking,” says Weissman, noting that four of the five mice were essentially cured. “We knew that we were on the track of a potential therapeutic.”

In less than a decade, Weissman and his colleagues at Stanford have found CD47 on every type of cancer they’ve been able to get their hands on. Meanwhile, at least three biomedical companies, including the Stanford spin-off Forty Seven, Inc., have raised and invested tens of millions of dollars to test drugs that block the molecule. The approach seems so promising that last August, Rider and Victoria McDowell, inventors of the vitamin product Airborne, offered $10 million to anyone who would grant them access to an anti-CD47 therapeutic—none of which have yet been tested for pediatric use—to treat their 17-year-old son’s brain tumor.

But back in 2008, when Weissman first tried to publish his work on how macrophages engulfed leukemia cells lacking CD47, his reviewers didn’t buy it. Since the 1980s, cancer researchers have linked macrophages and macrophage-stimulating genes to tumor growth and poor outcomes for cancer patients, and the cells had been pegged as nothing but bad news when it came to cancer. In 1996, for example, researchers from the University of Oxford reported that women whose breast cancer biopsies contained a high density of macrophages were much more likely to succumb to the disease over the subsequent five years than those with low densities.2 The same correlation was later confirmed in a dozen other types of cancer. These cells earned the name tumor-associated macrophages, or TAMs, and research focused on where they came from and how to block or deplete them. Weissman’s data suggesting that macrophages could help defeat cancer just didn’t fit.

“Several years ago, the idea was, ‘Let’s deplete these cells because they are bad,’” says Mikael Pittet, an immunologist at Harvard Medical School. Specifically, TAMs, which can make up as much as 50 percent of a tumor’s mass, had been found to repress other immune cell activity, encourage blood and lymph vessel development to support growing tumors, and help cancer cells metastasize to new sites in the body. But over the past decade, some research has surfaced to support Weissman’s conclusion that TAMs may have an upside, Pittet says. “I think now we are back to saying, ‘Maybe it’s just very complex.’”

TAMs start out either as tissue-resident macrophages, which originate from the embryonic yolk sac and take on tissue-specific roles during development, or as monocytes, which are born in the bone marrow and circulate in blood until they are recruited to tissues throughout adulthood. Tumors secrete signaling molecules, such as colony-stimulating factor 1 (CSF-1) and CC chemokine ligand 2 (CCL2), that attract monocytes and tissue-resident macrophages and convert these cells to the cancer-supporting TAM phenotype.

In the mid-1990s, reports linking CSF-1 to cancer were rolling out one after the other, implicating macrophages as accomplices to tumors. But these studies didn’t explain how the immune cells influenced the course of a particular cancer. To make sense of this growing literature, Jeffrey Pollard, a developmental biologist at the University of Edinburgh in Scotland, worked with colleagues to create a mouse model prone to developing breast cancer that also lacked the gene encoding CSF-1. The model revealed that the absence of CSF-1 had no effect on whether primary breast cancer tumors grew, but it did reduce the density of TAMs in the tumors and delayed metastasis.3

It made sense to Pollard that the link between macrophages and survival would have to do with cancer’s spread. “The reason you die of cancer is metastasis,” he says. Pollard’s findings have since been repeated in several animal models of cancer, and CSF-1 signaling has become a popular target for developing cancer drugs. There are now more than a dozen ongoing clinical trials testing monoclonal antibodies and pharmacologic inhibitors that disrupt the pathway.

Pollard’s team has also found that TAMs help tumors metastasize by supporting tumor angiogenesis, or new blood vessel development.4 In addition to supplying conduits for oxygen, nutrients, and growth factors to support a tumor’s development, angiogenesis lays out a path for metastatic cells. Other researchers have homed in on a specific subgroup of TAMs responsible for this angiogenesis, identified by their production of the protein Tie2.5

Tie2-producing TAMs also appear to act as chaperones for traveling tumor cells. While recording cell movement inside breast cancer tumors in live mice, John Condeelis and his team at Albert Einstein College of Medicine in New York recently found that Tie2+ macrophages were always present as a cancer cell approached and entered a blood vessel. But the macrophages were doing more than just accompanying tumor cells. “When these macrophages and tumor cells started to approach the vasculature, they underwent this rather peculiar geometric transformation where they would form a pyramid-type structure on the vessel wall, and it had three cell types in it,” Condeelis explains.

The pyramid always contained a Tie2+ macrophage, a cancer cell overexpressing a protein called Mena, and a blood vessel endothelial cell, all three in contact with one another. This suite of cells, which the researchers called a tumor microenvironment of metastasis (TMEM), had to be present for tumors to metastasize.6 In the TMEM, Tie2+ TAMs make vascular endothelial growth factor (VEGF), which signals blood vessel endothelial cells to separate and allow cancer cells to slip into the bloodstream.7 In healthy tissues, Condeelis says, similar structures develop at sites where new blood vessel branches will bud. In breast cancer, “instead of generating a branch on the vessel, you generate a doorway on the vessel.”

Last year, the researchers reported that treating mice with breast or pancreatic tumors with an inhibitor of Tie2 called rebastinib kept Tie2+ macrophages out of the tumors, reduced the ability of cancer cells to enter nearby blood vessels, and improved the efficacy of two chemotherapy drugs.8 Condeelis has also licensed the use of TMEMs to the Boston-based company MetaStat, Inc. as a clinical cancer biomarker that predicts whether breast cancer patients will go on to develop a recurrence with metastatic tumors.9

TAMs also appear to play a role at sites on the receiving end of tumor metastasis. A population of macrophages distinguished by their expression of the VEGF receptor Flt1 are more likely to be found at sites of metastasis than in primary tumors, Pollard’s team found. When cancer cells traveling in the blood attach to a blood vessel wall, these macrophages, dubbed metastasis-associated macrophages (MAMs), are already waiting on the other side. In a study published in 2009, Pollard and colleagues used fluorescence microscopy to track tumor cells injected into the blood vessels of mouse lung slices and watched as the cells made contact with MAMs across the vessel walls.10 When the team depleted MAMs, the number of tumor cells that got across the vessel wall into the tissue dropped by 50 percent.

Helping cancer cells in and out of blood vessels are just some of the steps in a complex cascade of several rate-limiting events required for successful metastases, says Pollard, but in recent years it’s become clear that “macrophages enhance those rates.”

Damage caused by radiation and many types of chemotherapy can also stimulate an influx of new TAMs to tumors, where the cells release molecules that promote cancer survival. At least one molecule responsible for this protective effect, identified by cancer biologist Johanna Joyce and her team at the University of Lausanne in Switzerland in 2011, is a protein-chopping enzyme called cathepsin. The researchers reported that TAMs release cathepsin in response to chemotherapy drugs and that cathepsins reduced tumor cell death after treatment with the chemotherapy drug paclitaxel (Taxol). Last year, they found that as-yet unidentified TAM-secreted molecules interfere with the ability of paclitaxel to induce DNA damage and to block mitosis in cancer cells.12

TAMs may also thwart cancer immunotherapies. Recently, Harvard’s Pittet and his team caught TAMs in the act of sequestering an anti-PD-1 treatment, which is meant to bind and activate tumor-killing T cells.13 Using high-resolution imaging in live mice, Pittet’s team found that within an hour of treatment, TAMs used antibody-binding receptors to steal the drug from the surface of T cells. When the researchers treated mice with antibodies that block the receptors on the TAMs before anti-PD-1 treatment, the drug remained on T cells at least twice as long, and the animals’ tumors shrank more over 10 days of treatment.