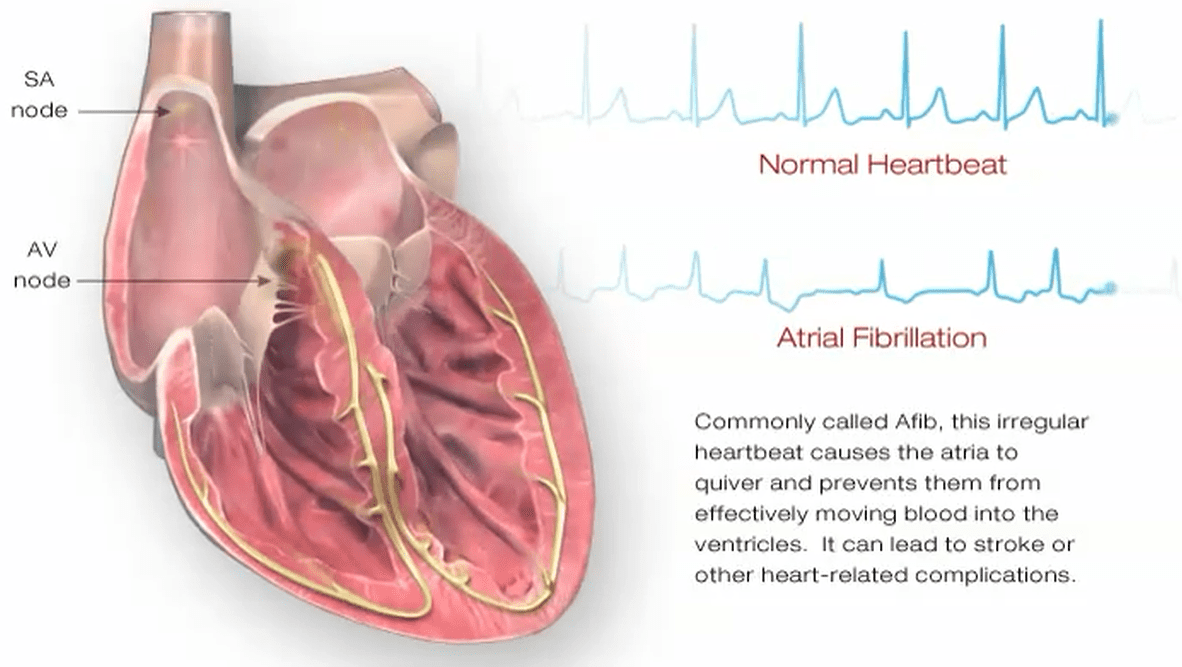 BACKGROUND: the utilization of warfarin reduces the speed of ischaemic stroke in patients with fibrillation but requires frequent monitoring and dose adjustment. Rivaroxaban, an oral factor Xa inhibitor, may provide more consistent and predictable anticoagulation than warfarin.

METHODS: during a double-blind trial, we randomly assigned 14,264 patients with nonvalvular fibrillation who were at increased risk for stroke to receive either rivaroxaban (at a daily dose of 20 mg) or dose-adjusted warfarin. The per-protocol, as-treated primary analysis was designed to work out whether rivaroxaban was noninferior to warfarin for the first end point of stroke or systemic embolism. [1]

Background: during this study we tested the hypothesis that fibrillation (AF) causes electrophysiological changes of the atrial myocardium which could explain the progressive nature of the arrhythmia.

Methods and Results: Twelve goats were chronically instrumented with multiple electrodes sutured to the epicardium of both atria. Two to three Weeks after implantation, the animals were connected to a fibrillation pacemaker which artificially maintained AF. Whereas during control episodes of AF were short lasting (6±3 seconds), artificial maintenance of AF resulted during a progressive increase within the duration of AF to become sustained (>24 hours) after 7.1±4.8 days (10 of 11 goats). During the primary 24 hours of AF the median fibrillation interval shortened from 145±18 to 108±8 ms and therefore the inducibility of AF by one premature stimulus increased from 24% to 76%. The atrial effective biological time (AERP) shortened from 146±19 to 95±20 ms (−35%) (S1S1, 400 ms). At high pacing rates the shortening was less (−12%), pointing to a reversion of the traditional adaptation of the AERP to pulse . In 5 goats, after 2 to 4 weeks of AF, sinus rhythm was restored and every one electrophysiological changes were found to be reversible within 1 week. [2]

The Canadian fibrillation Anticoagulation Study was a randomized double-blind placebo-controlled trial to assess the potential of warfarin to scale back systemic thromboembolism and its inherent risk of hemorrhage. As a results of the publication of two other “positive” studies of comparable design and objective, this study was stopped early before completion of its planned recruitment of 630 patients. there have been 187 patients randomized to warfarin and 191 to placebo. Permanent discontinuation of study medication occurred in 26% of warfarin-treated and 23% of placebo-treated patients. The firing range of the international normalized ratio was 2 to three . For the warfarin-treated patients, the international normalized ratio was within the firing range 43.7% of the study days, above it 16.6% of the study days and below it 39.6% of the study days. Fatal or major bleeding occurred at annual rates of two .5% in warfarin-treated and 0.5% in placebo-treated patients. Minor bleeding occurred in 16% of patiente receiving warfarin and 9% receiving placebo. the first outcome event cluster was nonlacunar stroke, noncentral nervous systemic embolism and fatal or intracranial hemorrhage. [3]

To identify genetic variation underlying fibrillation , the foremost common arrhythmia , we performed a genome-wide association study of >1,000,000 people, including 60,620 fibrillation cases and 970,216 controls. We identified 142 independent risk variants at 111 loci and prioritized 151 functional candidate genes likely to be involved in fibrillation . Many of the identified risk variants fall near genes where more deleterious mutations are reported to cause serious heart defects in humans (GATA4, MYH6, NKX2-5, PITX2, TBX5)1, or near genes important for skeletal muscle function and integrity (for example, CFL2, MYH7, PKP2, RBM20, SGCG, SSPN). [4]

Background: Catheter of fibrillation remains challenging due to the high degree of variability of the vena pulmonalis anatomy. Therefore, 3D imaging systems are frequently used before an ablation procedure. Three-dimensional transesophageal echocardiography provides a superb overview over the individual left atrial morphology without a number of the restrictions related to other imaging techniques.

Methods: In 50 patients, three-dimensional transesophageal echocardiography was performed immediately before an ablation procedure. the pictures were available throughout the ablation procedure. In most of the patients with paroxysmal fibrillation, the cryoablation technique was used (Arctic Front Balloon, CryoCath Technologies/Medtronic; group A2). within the other patients, a circumferential vena pulmonalis ablation was performed using the CARTO system (Biosense Webster; group A1 (paroxysmal atrial fibrillation), B (persistent atrial fibrillation)). [5]