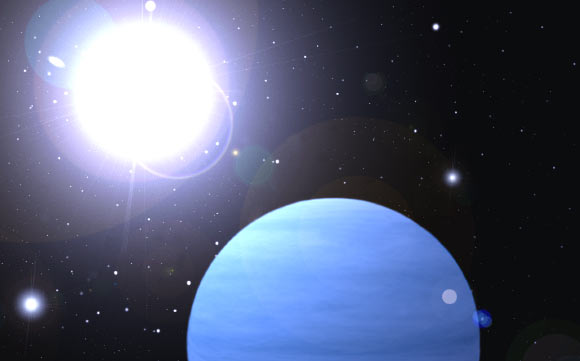 A group of astronomers from Ireland, the Netherlands, the United Kingdom, and the United States has found that the atmosphere of the exoplanet WASP-96b is cloud-free.

WASP-96b was discovered in 2013 by Coel Hellier of Keele University and colleagues using data from the WASP (Wide Angle Search for Planets) survey.

The planet is a gas giant similar to Saturn in mass and exceeding the size of Jupiter by 20%.

This enabled the researchers to measure the decrease of starlight caused by the planet and its atmosphere, and thereby determine the planet’s atmospheric composition.

The spectrum of WASP-96b shows the complete fingerprint of sodium, which can only be observed for an atmosphere free of clouds.

“WASP-96b is the only exoplanet that appears to be entirely cloud-free and shows such a clear sodium signature, making the planet a benchmark for characterization.”

“Until now, sodium was revealed either as a very narrow peak or found to be completely missing,” he added.

“This is because the characteristic ‘tent-shaped’ profile can only be produced deep in the atmosphere of the planet and for most planet clouds appear to get in the way.”

Clouds and hazes are known to exist in some of the hottest and coldest solar system planets and exoplanets.

The presence or absence of clouds and their ability to block light plays an important role in the overall energy budget of planetary atmospheres.

“It is difficult to predict which of these hot atmospheres will have thick clouds,” explained team member Professor Jonathan Fortney, from the University of California, Santa Cruz.

“By seeing the full range of possible atmospheres, from very cloudy to nearly cloud-free like WASP-96b, we’ll gain a better understanding of what these clouds are made of.”

“WASP-96b will also provide us with a unique opportunity to determine the abundances of other molecules, such as water, carbon monoxide and carbon dioxide with future observations,” added team member Dr. Ernst de Mooij, from Dublin City University.

The results appear online today in the journal Nature.