Female sexual behavior in mice is controlled by kisspeptin neurons

Female sexual behavior in mice is controlled by kisspeptin neurons

Sexual behavior is essential for the survival of many species. In female rodents, mate preference and copulatory behavior depend on pheromones and are synchronized with ovulation to ensure reproductive success. The neural circuits driving this orchestration in the brain have, however, remained elusive. Here, we demonstrate that neurons controlling ovulation in the mammalian brain are at the core of a branching neural circuit governing both mate preference and copulatory behavior. We show that male odors detected in the vomeronasal organ activate kisspeptin neurons in female mice. Classical kisspeptin/Kiss1R signaling subsequently triggers olfactory-driven mate preference. In contrast, copulatory behavior is elicited by kisspeptin neurons in a parallel circuit independent of Kiss1R involving nitric oxide signaling. Consistent with this, we find that kisspeptin neurons impinge onto nitric oxide-synthesizing neurons in the ventromedial hypothalamus. Our data establish kisspeptin neurons as a central regulatory hub orchestrating sexual behavior in the female mouse brain. 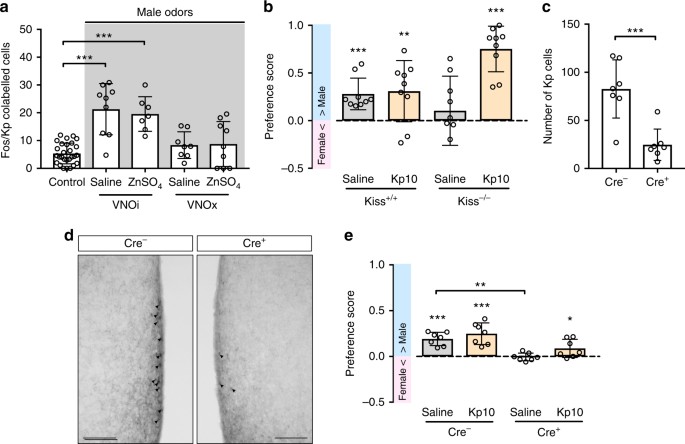 Female copulatory behaviors are exquisitely orchestrated by sex hormones in order to coincide with ovulation and thus to ensure the highest possible chance of fertilization1. Female rodents typically control the initiation and timing of copulatory contacts with males2. This is achieved by a succession of precopulatory behaviors bringing the female in contact with males and is driven by sexual motivation and mate preferences. Once in direct contact with the male, the female will display receptive behaviors, such as the lordosis posture, which is necessary for intromission. The neural circuits and the individual neurons underlying the coordination of sexual motivation and mate preference with ovulation have, however, remained elusive.

Mice are nocturnal animals and heavily rely on olfactory cues, such as pheromones, to identify potential mates3. Pheromones are detected and processed by a highly specialized neural circuit, the accessory olfactory system, which initiates in the vomeronasal organ (VNO) in the nasal septum. The vomeronasal pathway runs in parallel to the main olfactory system originating in the main olfactory epithelium (MOE). The accessory olfactory system has been functionally linked to a range of innate behaviors including reproduction4,5,6,7,8. How exactly pheromones impinge on both reproductive physiology and behavior has only recently begun to emerge. Signals triggered by pheromones in the neuroepithelium of the VNO are transmitted to gonadotropin-releasing hormone (GnRH) neurons in the reproductive center of the neuroendocrine brain9. GnRH neurons are located in the preoptic area of the anterior hypothalamus and control the hypothalamus–pituitary gonadal axis by releasing the GnRH peptide from axon terminals in the median eminence10. GnRH then acts on gonadotrope cells in the anterior pituitary to trigger secretion of the gonadotropins; luteinizing hormone (LH) and follicle-stimulating hormone (FSH). LH and FSH in turn regulate sex hormone production (i.e., estradiol in females and testosterone in males) and the maturation of the gametes. In rodents, pheromones are known to modulate GnRH neuronal activity in a sex-dependent manner11,12. Exposure to female pheromones activates GnRH neurons in male mice consequently leading to a LH/testosterone surge, and vice versa male pheromones induce LH release in female mice13.

Sex hormones provide gonadal feedback to the brain; however, GnRH neurons do not express the appropriate steroid hormone receptors and are thus not direct targets of this feedback regulation10. Instead, gonadal sex steroid feedback is indirectly relayed to GnRH neurons. One critical neuronal population relaying sex steroid feedback to GnRH neurons lies in the rostral periventricular area of the third ventricle (RP3V) of the hypothalamus and produces the neuropeptide kisspeptin. Kisspeptin is a potent stimulator of GnRH neuronal activity (acting via its receptor Kiss1R, also known as GPR54)14,15 and controls ovulation by driving the LH surge16,17. RP3V kisspeptin neurons display a profound sexual dimorphism with greater neuron numbers in female than in male mice18 consistent with a pivotal role of these cells in female reproduction.