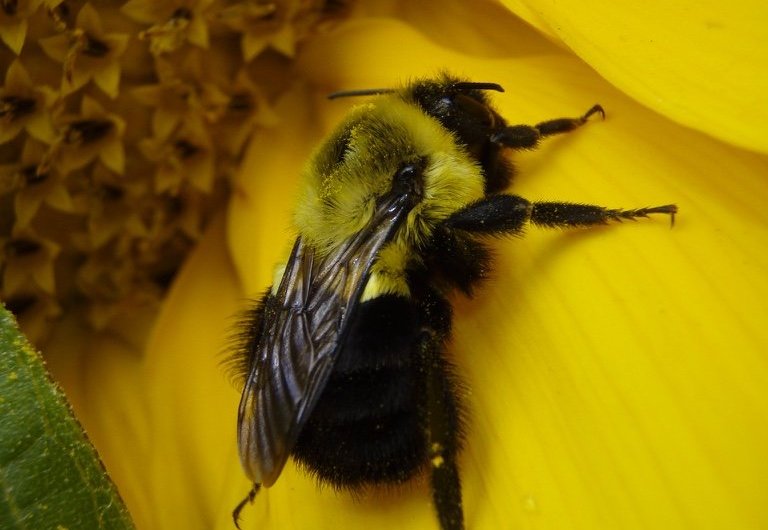 Spring is a busy time for bumblebee queens.

After emerging from hibernation, their to-do list includes making nests, laying eggs, and keeping their larvae warm and fed. It’s physiologically demanding, and the stakes are high: the success of the colony depends on a queen‘s solitary work during this time.

In a study published today in Proceedings of the Royal Society B, researchers at the University of California, Riverside found that environmental threats are piling onto the stress faced by nest-building bumblebee queens.

Led by Hollis Woodard, an assistant professor of entomology, the team found that exposure to a widely used insecticide and a poor diet negatively impacted bumblebee queens’ health and work, which could have dramatic consequences on an already dwindling pollinator group.

Bumblebees are workhorses of the insect pollinator world, playing a key role in both natural and agricultural ecosystems. Crops as diverse as tomato, blueberry, and red clover all depend heavily on their pollination services. Bumblebees, which are both fast and fuzzy, are highly efficient at transporting pollen from one flower to another.

Unlike honeybees, which are perennial, bumblebee colonies arise each year from the work of a single queen to establish a nest of up to 400 workers.

“Queens are probably already a bottleneck for bumblebee population dynamics,” said Woodard, whose group studies how bees are adapting to climate and environmental changes. “If a queen dies because of exposure to manmade stressors, then a nest full of hundreds of important pollinators simply won’t exist.”

Previous studies have implicated insecticides, including the widely used neonicotinoids, with a decline in pollinators. While neonicotinoids are usually applied to seeds, they contaminate soil—where bumblebee queens hibernate—and make their way into plant tissues, including pollen and nectar.

Another stressor bumblebees face is declining floral diversity, driven by agricultural land use and other global changes.

“Bumblebees are floral generalists that collect pollen from a wide variety of plant species, and there is evidence from previous studies that a mixed diet supports bumblebee colony development better than a diet comprising pollen from a single flower,” Woodard said.

Woodard’s team tested the effects of temporary or sustained exposure to the neonicotinoid imidacloprid and a single-source pollen diet on queens’ mortality, activity, and ability to establish healthy nests.

They showed bumblebee queens were far less active and six times more likely to die during sustained exposure (37 days) to the pesticide, which could be somewhat mitigated by a shorter exposure of 17 days. The surviving exposed bees also produced only a third of the eggs and a fourth of the larvae of untreated queens.

“Ours is the first study to explore the impact of multiple stressors on bumblebee queens during an understudied but important phase of their lives. It joins a small but growing body of research suggesting there are unique effects on queens that can have dramatic consequences for future generations,” Woodard said.

Woodard said the data support the idea that use of neonicotinoid insecticides in the U.S. should be reconsidered. The member states of the European Union recently agreed to ban neonicotinoids from all fields by the end of 2018 due to the serious danger they pose to bees.

“Our research suggests there are hidden costs to insecticide use that may only be observed if you consider the totality of an organism’s life history. This is intricately linked to human well-being because bee heath is extremely important for food production, biodiversity, and the environment,” she said.