Debate over the identity of an intestinal niche-cell population settled 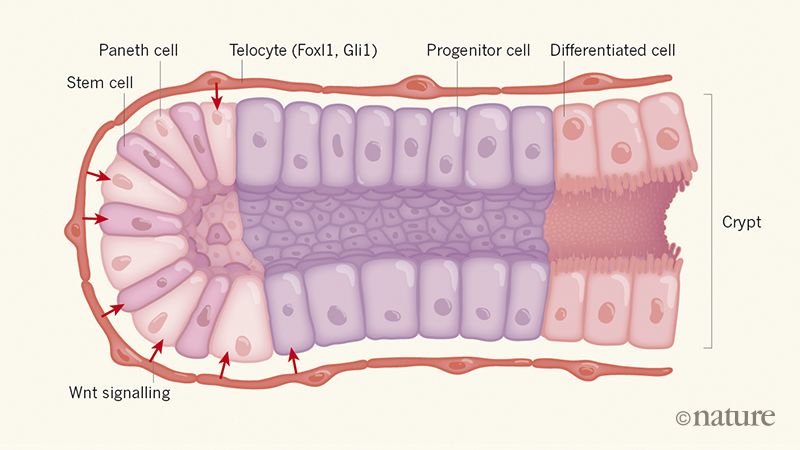 Debate over the identity of an intestinal niche-cell population settled

The human small intestine and colon are maintained throughout life by tissue-resident stem cells, which renew the gut lining at an astounding rate by generating billions of cells every day. The self-renewal, proliferation and differentiation of these intestinal stem cells are prompted by molecular signals from nearby cells called niche cells. Over the past decade, stem-cell biologists have debated the identity of the intestinal niche cells1. Two papers in Nature (one by Shoshkes-Carmel et al.2 published earlier this year, and the other by Degirmenci et al.3) now identify a niche-cell population that provides a signal essential for stem-cell renewal.

Intestinal cells are arranged in a strict spatial layout. Stem cells are found at the base of pit-like structures in the gut wall, called crypts (Fig. 1). They produce highly proliferative progenitor cells, which differentiate into the various mature epithelial-cell types that make up the gut lining as they move away from the crypt base.

Wnts are secreted proteins that bind to cell-surface receptors to activate the Wnt signalling pathway in neighbouring cells. They are produced by many different intestinal cells, including Paneth cells. However, genetic depletion of Wnts in all intestinal epithelial cells does not alter stem-cell function or crypt structure10. Therefore, intestinal epithelial cells are not an essential source of Wnt. This implies that there must be an alternative, non-epithelial-cell source for this niche factor. But what is that source?

An intestinal population of connective-tissue cells called stromal cells, which produce the protein Foxl1, is required for crypt-cell proliferation in adult mice11. Shoshkes-Carmel et al. took advantage of this fact to identify a Wnt source. They used genetic engineering to delete the gene Porcn, which encodes a protein required for Wnt secretion, in Foxl1-producing cells in mice. This resulted in rapid, catastrophic crypt collapse, a decrease in the number of intestinal stem cells, and defects in epithelial-cell proliferation. Extensive epithelial degradation was apparent in both the small intestine and colon three days after Porcndeletion. Thus, the Foxl1-producing stromal cells are the elusive Wnt-producing niche cells.

Degirmenci et al. took a similar approach, but analysed stromal cells that produced a different protein, Gli1. The same research group previously demonstrated that this cell population expressed Wnts12. The authors deleted the gene Wls, which (like Porcn) encodes a protein required for Wnt secretion, in Gli1-producing cells in mice. This led to crypt collapse in the colon. No effects on the small intestine became apparent until the researchers deleted Wls in both epithelial cells and Gli1-producing stromal cells. Surprisingly, the response was relatively slow in both cases — stem-cell loss and crypt collapse took two to three weeks.

Wnt depletion has a more limited, slower effect in Gli1-producing cells than in Foxl1-producing cells, but the reason for this is unclear. Perhaps Wnt secretion was not completely blocked in the Gli1-producing cells in the small intestine, and the slower effect was due to the long half-life of the Wls protein12. Regardless of the differences, the fact that blocking Wnts in each cell population leads to stem-cell loss suggests that these stromal cells are the elusive Wnt-producing niche cells. The authors of the two papers have shown that there is physical overlap between the Foxl1-producing and Gli1-producing stromal cells, suggesting that each study identified the same cell population. However, single-cell analyses revealed subpopulations within each of these stromal-cell types. Whether only certain subpopulations have niche function remains to be defined.

Both groups found that the Wnt-expressing niche cells were positioned close to intestinal epithelial cells, in a prime location to affect stem-cell function. Shoshkes-Carmel et al. performed high-resolution microscopy, which revealed that these cells are telocytes — thin cells with long protrusions called telopodes, which form a 3D network underlying the epithelial cells throughout the gut. Both groups showed that these telocytes might be signalling hubs, because they express, in addition to Wnts, several other niche factors involved in stem-cell function and tissue renewal. Moreover, telopodes have the potential to interact with immune cells, blood vessels and nerves13. Telocytes might therefore be central coordinators of intestinal renewal beyond their role in Wnt signalling.

Wnt signalling is highest at the base of the crypts, where stem cells reside1. Shoshkes-Carmel et al. showed that telocytes express different levels of Wnts and Wnt inhibitors along the length of the crypt, with higher levels of Wnt protein at the crypt base enabling localized activation of Wnt signalling in stem cells. Whether this compartmentalization reflects reciprocal signalling interactions between stem cells and telocytes is an interesting question — if so, it could indicate that telocytes are responsive to stem-cell status. In support of this idea, Degirmenci et al. showed that the numbers of Gli1-producing cells increased after colon damage, suggesting that this stromal population might adapt to restore homeostasis after damage.

Identification of telocytes as Wnt niche cells has resolved the controversy over which Wnt source regulates intestinal maintenance. A key next step will be to characterize the telocytes’ role in intestinal regeneration after injury, or in diseases that affect stem-cell proliferation, such as colon cancer. Further analysis will also be needed to determine whether a single telocyte population is responsible for niche function, or if different populations orchestrate the many stromal growth factors and inhibitors that regulate intestinal stem-cell function. A deeper understanding of how telocytes regulate intestinal stem cells is likely to provide insights into mechanisms of normal intestinal-tissue renewal and regeneration, and dysfunction associated with intestinal disease.