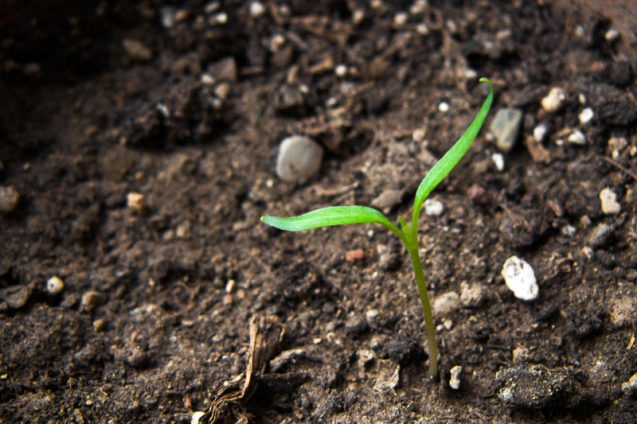 To avoid the most dangerous effects of climate change, the Paris Accord recommends limiting global warming to less than 2˚ C above pre-industrial levels. Achieving that will likely involve removing carbon dioxide from the atmosphere, according to the Intergovernmental Panel on Climate Change. But strategies like capturing and storing the carbon emissions from biofuel-burning power plants, or planting new forests to absorb carbon, can create their own problems. If used on a scale large enough to be effective, they would require too much land, water, or energy, or are too expensive.

Sequestering carbon in soil, however, is a relatively natural way of removing carbon dioxide from the atmosphere with fewer impacts on land and water, less need for energy, and lower costs. Better land management and agricultural practices could enhance the ability of soils to store carbon and help combat global warming.

“Thinking about ways to increase soil carbon storage is a really important weapon in the arsenal [against climate change],” said Ben Taylor, an ecosystem ecologist and Ph.D. candidate in Columbia University’s Department of Ecology, Evolution and Environmental Biology. “The carbon in soils is greater than all the carbon in our biomass and the atmosphere combined, so even small changes in that pool are going to have really large effects for us. If we can figure out how to manage that soil carbon pool size, it could be really effective.” Currently, soils remove about 25 percent of the world’s fossil fuel emissions each year. Most soil carbon is stored as permafrost and peat in Arctic areas, and in moist regions like the boreal ecosystems of Northern Eurasia and North America. Soils in hot or dry areas store less carbon.

How much carbon soils can absorb and how long they can store it varies by location and is effectively determined by how the land is managed. Because almost half the land that can support plant life on Earth has been converted to croplands, pastures and rangelands, soils have actually lost 50 to 70 percent of the carbon they once held. This has contributed about a quarter of all the manmade global greenhouse gas emissions that are warming the planet. Agricultural practices that disturb the soil—such as tilling, planting mono-crops, removing crop residue, excessive use of fertilizers and pesticides and over-grazing—expose the carbon in the soil to oxygen, allowing it to burn off into the atmosphere. Deforestation, thawing permafrost, and the draining of peatlands also cause soils to release carbon. Through photosynthesis, plants absorb carbon dioxide from the atmosphere. They use water and sunlight to turn the carbon into leaves, stems, seeds and roots. As the plants respire, they return some carbon dioxide to the atmosphere and exude some carbon as a sugary substance through their roots. This secretion feeds the microbes (bacteria, fungi, protozoa and nematodes) that live underground. When the plants die, soil microbes break down their carbon compounds and use them for metabolism and growth, respiring some back to the atmosphere.

Because microbial decomposition releases carbon dioxide, the soil can store more carbon when it is protected from microbial activity. One key way that happens is through the formation of soil aggregates. This occurs when tiny particles of soil clump together, sheltering carbon particles inside them. Mycorrhizal fungi, which produce sticky compounds that facilitate soil aggregation, are able to transfer 15 percent more carbon into the soil than other microbes. Soils with high clay content are also able to form chemical bonds that protect carbon from microbes. These aggregates give soil its structure, which is essential for healthy plant growth.

Some carbon, made up mainly of plant residue and the carbon exuded by plant roots, remains in soil only for a few days to a few years. Microbes can easily digest this “fast pool” of carbon, so it emits a great deal of carbon dioxide. The “slow pool,” where carbon can remain for years to decades, is composed of processed plant material, microbial residue from the fast pool and carbon molecules that are protected from microbes. A third “stable pool,” comprised of humus—decomposed organic material—and soil carbon that is well protected from microbes, is found below one meter deep and can retain carbon for centuries to millennia.

A 2017 study estimated that with better management, global croplands have the potential to store an additional 1.85 gigatons carbon each year—as much as the global transportation sector emits annually. Moreover, some scientists believe soils could continue to sequester carbon for 20 to 40 years before they become saturated.

Most crops are annuals, so after harvest, fields are often left bare. Leaving crop residue in the ground or planting cover crops that are not to be harvested, like clover and legumes, can compensate for carbon losses from tillage by putting more carbon into the soil. Crop rotation and the use of diverse crops, especially those with deeper roots such as perennials, add more varied biomass to the soil (some of which might be more resistant to decomposition) and hence more carbon.

When tillage is minimized, soil carbon is not exposed to oxygen and soil aggregates remain intact, sheltering their carbon.

Rotational grazing helps keep carbon in the soil by moving herds to new pastures after grazing, allowing old ones to regrow. In addition, carbon in the form of manure gets spread around.

Manure and compost increase soil productivity and the formation of stable carbon that can remain in the soil for decades. The Marin Carbon Project found that a one-time application of compost increased the soil’s carbon content continually, at a rate comparable to removing 1.5 metric tons of carbon from the atmosphere each year.

“By restoring the soil with natural sources of organics that support beneficial microbes that improve plant growth, the plants will flourish and draw down the carbon from the atmosphere,” O. Roger Anderson, a biologist at the Earth Institute’s Lamont-Doherty Earth Observatory, explained via email. “Theoretically the plants will grow at a more robust rate, drawing down CO2 more rapidly than the relatively lower emissions of CO2 that the metabolism of the microbes produce in a healthy soil ecosystem.”

How will climate change affect soils?

Since temperature and precipitation affect the distribution of organic matter and the amount of carbon in soils, how will climate change alter these carbon reservoirs?

New research suggests that as global warming continues, soils will release more carbon than was previously thought. Earlier studies that heated soils 5 to 20 cm deep found that the soil would release 9 to12 percent more carbon dioxide than normal. But deeper levels of soil contain more than 50 percent of global soil carbon and after heating soils to 100 cm deep, scientists found that 4˚ C of warming could result in soils releasing as much as 37 percent more carbon dioxide than normal. As increasing amounts of CO2 in the atmosphere stimulate plant growth and the secretion of root exudates, studies indicate that there will be more carbon for microbes in the fast pool. This will boost microbial decomposition and respiration of CO2. The added root secretions could also “prime” the microbial community to digest soil organic matter that might otherwise not be as available. Some models suggest that, later this century, soils could change from being a carbon sink to a source of carbon due to increased microbial respiration.

Moreover, the amount of carbon that microbes emit might actually increase over time, further intensifying global warming. A 26-year-long soil warming study in a hardwood forest found that warming temperatures could spur recurring pulses of carbon dioxide emissions from soils. For the first 10 years, as microbes in the heated plots decomposed carbon and released it into the atmosphere, CO2 levels spiked. Afterwards, levels fell and remained the same as those of unheated plots for the next eight years. Then CO2 emissions ramped up again for five years followed by another decline. The scientists concluded that the community of microbes changed over the years. After the first wave of microbes that decomposed the easily digestible carbon died off, a new set of microbes evolved that were able to decompose more resistant carbon that contains more minerals or is wood-based. Most global warming studies only calculate the initial rise in carbon emissions; this research suggests that microbes will evolve, resulting in continuing pulses of CO2 into the atmosphere. However, scientists still do not know how much extra carbon might result or how fast it might be released.

Scientists at the University of California at Irvine think that models may have overestimated soil’s potential to sequester carbon by 40 percent. Using radiocarbon dating and data from 157 soil samples, they found that the average age of soil carbon is much older than earlier estimates. It could take hundreds to thousands of years for soil to absorb large amounts of carbon from the atmosphere. “The soil will eventually be a large carbon sink, but it won’t be present in the next century,” said one of the researchers.

These recent studies suggest that soil carbon storage is not a silver bullet solution to climate change. The continuing debate about its efficacy reflects how complex the system is and how much research still needs to be done. Ultimately, the best way to combat climate change is to reduce our fossil fuel consumption and move to renewable energy sources, but scientists will continue to study how soil carbon storage might help us along the way. In the meantime, the agriculture and land management practices that increase soil carbon also provide other benefits. Fertile soils produce more food, promote biodiversity, hold moisture better, and are less susceptible to erosion, floods, nutrient loss, and desertification. More microbes in the soil enable plants to grow deeper root systems that allow them to tolerate drought better, and be more resistant to pests. Enhanced carbon in soils improves soil and water quality. These are all effects that will help society feed the growing global population and be more resilient to the impacts of climate change.