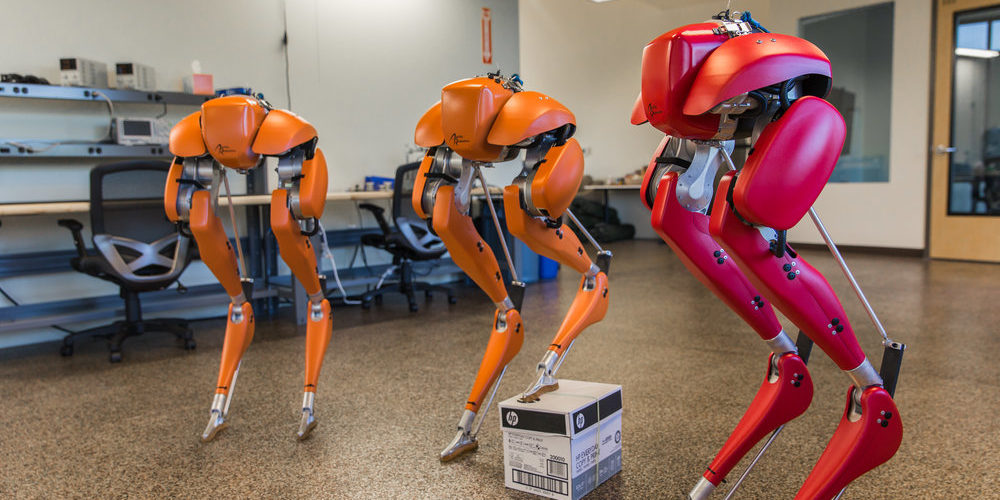 Agility Robotics is announcing US $8 million in Series A funding “to accelerate product, technology, and business development.” Leading the round is Playground Global, founded by Android cocreator and ex-Google Robotics head Andy Rubin, and also joining in is Sony Innovation Fund.

We don’t write about funding rounds all that often, but this could be the first robotics company to get such a significant amount of VC funding to develop a realistic commercial bipedal robot. There are certainly other well-funded companies working on bipeds, including Boston Dynamics and Schaft. But while it’s not that clear what commercial applications these companies are targeting, Agility Robotics is very specifically and deliberately working on a legged robot that can make deliveries.

From the press release:

Agility Robotics is solving the mobility problem faced by mobile robots, to allow machines to work with humans, for humans, and around humans. Robotic legged locomotion will enable a major transformation of our world, with applications in logistics and package delivery for fast and inexpensive 24/7 service, in-home robots for telepresence and assistance, and real-time data collection and mapping of human and natural environments. Walking robots will one day be a common sight, much like the automobile, and with similar impact on our society. Agility Robotics will be a leader in this transformative change.

“We wanted to focus on solving mobility in areas where wheeled platforms can’t reach (i.e., stairs, curbs, etc) and legged systems are best suited to address—opening up opportunities to solve the last 100 feet rather than the last mile”—Bruce Leak, Playground Global

“One day” is the key phrase there—Agility Roboticsisn’t making a commercial robot yet. What we’ve seen from Agility and Cassie so far is just the start, and the robot is still (for now) essentially a research platform. But the company says Cassie has an enormous amount of practical potential. This is where $8 million could make a huge difference, by enabling the Albany, Ore.–based company to help make its technology into more of a useful commercial prototype.

To get some perspective from the folks who decided to pour a big pile of money into Agility, we spoke with Bruce Leak, cofounder of Playground Global, via email.

IEEE Spectrum: Legged locomotion outside of a research lab is still very challenging for bipedal robots. What convinced you that now is the right time to invest in a company developing a bipedal robot for commercial applications?

Bruce Leak: Agility’s architecture is radically different than conventional bipedal systems. Jonathan and his team have dedicated over a decade of research to understand the fundamental principles of animal morphology and locomotion behavior to design an energy-efficient bipedal system. They’ve designed their legged platform with manufacturability, scalability, and energy-efficiency in mind and have demonstrated step change improvements in terms of cost, performance, and power compared to conventional bipedal robots.

There are a few other companies working on bipedal robots, including Schaft and Boston Dynamics. What do you feel sets Agility Robotics apart from these companies?

Boston Dynamics and Schaft have designed really impressive machines but they rely on active control and high-powered actuation, which comes at the expense of significant power consumption. Agility has developed a novel architecture that leverages passive dynamics and mechanically embodies a “spring-mass model” to achieve human-like gait dynamics. The combination of implementing passive dynamics in hardware and mechanical springs to store and release energy when necessary via actuation lets them achieve superior energy efficiency compared to state-of-the-art bipedal systems.

What kind of impact do you hope that legged robots will have on society?

A lot of companies are focusing their development efforts on automating wheeled platforms. We wanted to focus on solving mobility in areas where wheeled platforms can’t reach (i.e., stairs, curbs, etc) and legged systems are best suited to address—opening up opportunities to solve the last 100 feet rather than the last mile.

Bruce’s comments here emphasize the potential commercial aspects of Cassie. For real-world robots, you want something that you can build many of, something relatively affordable, and something that you can use efficiently in terms of energy consumption as well as the cost and the hassle of maintaining it. You also want to be solving a well-defined and unique problem—road vehicles have the last-mile problem well covered, but as Bruce says, that last 100 feet (or even last 10 feet) is not constrained at all, and can be very complicated, but it’s necessary if you want to deliver things to customers who aren’t home.

Delivery, we hope, is just the first step for a commercial Cassie, as Agility’s press release suggests:

Agility Robotics will work to address a variety of vertical markets that can be impacted by this technology, implementing market-specific configurations for size, scale, number of legs, sensing, manipulation, and other market-specific engineering choices.

I’m imaging a herd of tiny little Cassies sized so that they can deliver one cupcake apiece, but that may just be because I could really go for a cupcake right now, and because it would be adorable. Seriously though, we’re excited to see how Agility decides to add sensing and especially manipulation to their robots—even with $8 million, useful autonomy is still a hard problem, but we’re confident that they’ll make it happen.